Home > Back to Search Results > Battle of Chickamauga...
Click image to enlarge 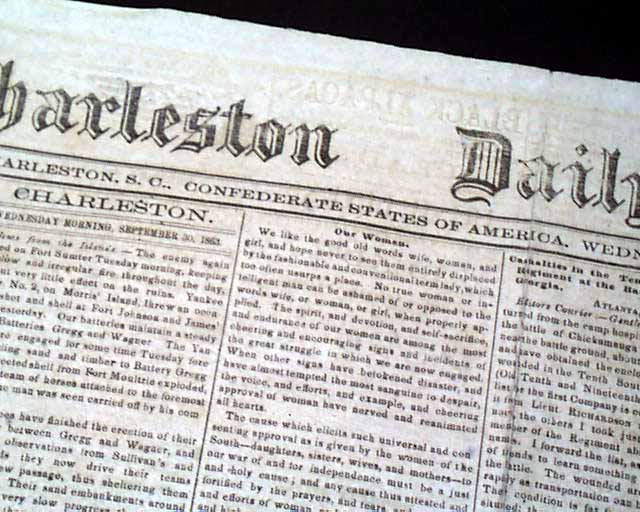 
CHARLESTON DAILY COURIER, South Carolina, Sept. 30, 1863  This was one of only a few newspapers which printed: "Confederate States of America" in the dateline.
The front page includes: "Difficulty of Obtaining Intelligence--General Hood's Condition--Arrival of More Prisoners--No Indications of an Early Engagement" and "Promotions in the Army" "The Old Flag" "The Government & The War" "Our Women" "Casualties in the South Carolina Regiment at the Battle of Chickamauga, Georgia" "The Situation at Chattanooga" and a bit more.
But the best content on the ftpg. is over a column of detailed reporting headed: "The Battle of Chickamauga" which was a victory for the Confederates.
The bkpg. is mostly taken up with ads but also has reports from the: "Legislature of South Carolina" which includes a lengthy letter signed in type: G. T. Beauregard.
Complete as a single sheet newspaper, never-trimmed margin, very nice condition.