Home > Back to Search Results > Confederates hold on to hope...
Click image to enlarge 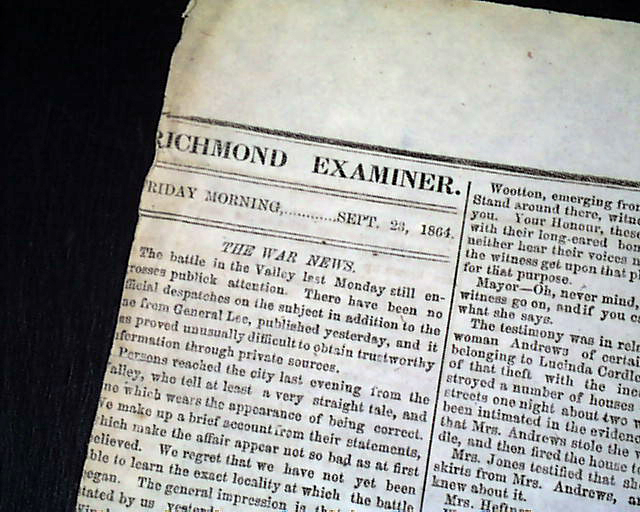 The front page has over half a column of: "The War News" with reports from the Shenandoah Valley, Georgia, and Petersburg. Also on the ftpg. is: "Confession of the Condemned (small hole here: see) & other smaller items.
The back page has the always interesting editorial still showing some glimmer of optimism with: "...On the other hand, the Southern people are at one time confident that the enemy has made his final effort & been foiled; independence is won...A sudden change takes place, our armies are forced to retreat, a fort is captured, the Kaleidoscope changes & all is impenetrable gloom where but a moment before the colours were those of radiant hope...At present the publick mind, depressed with the fall of Atlanta, sustains another shock at the defeat in the Valley...Yet it is but two short months since this same army of the Valley had won the most complete victory that Confederate arms had ever gained..." & much more. It ends with: "He who never loses courage is master of the future. This is a good motto for the present emergency."
Other items on the bkpg. include: "Latest News From the North" "The Fight in the Valley" "Opinions of the English Press" "The Army Vote & the Presidency" & other smaller items.
Complete as a single sheet newspaper with a one column masthead, typical from the Confederacy late in the war as most paper mills were in the North, a bit close-trimmed at the left margin affects some ads & non-mentioned articles & just touching some letters on the ftpg.