Home > Back to Search Results > Concerning the Battle of Gettysburg and the fall of Vicksburg...
Click image to enlarge 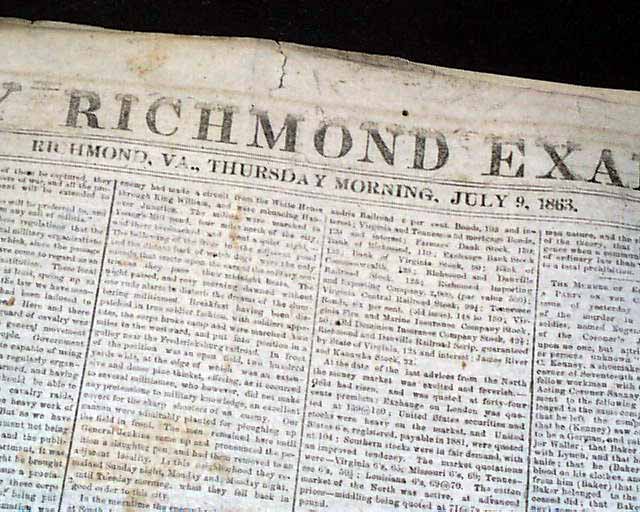 Concerning the Battle of Gettysburg and the fall of Vicksburg...


DAILY RICHMOND EXAMINER, Virginia, July 9, 1863  This is a terrific issue, with various reports relating to two of the major events of the entire war: the Battle of Gettysburg and the fall of Vicksburg.
The front page has: "From General Lee's Army" which reports nothing new, but notes that: "...accounts from Vicksburg represent Johnston as pressing upon Grant & that they are much depressed by the result of Banks' expedition against Port Hudson."
This is followed by a significant report headed: "Vicksburg" which begins: "Yesterday was the most disgustingly disagreeable day of the war. The weather was horrid & the news, such as could be obtained, execrable in the last degree...stating that Vicksburg had fallen, though unconfirmed by official announcement...People were depressed by it, though at the same time, they could not believe it...". But just a paragraph later the latest news was received by the newspaper by telegraph from General Johnston, datelined "Jackson, July 7, 1863" which begins: "Vicksburg capitulated on the 4th instant. The garrison was paroled, & are to be returned to our lines..." signed in type: Joseph E. Johnston, General. But still there was doubt this news was authentic.
The editorial on page 2 is almost entirely taken up with the situation at Vicksburg, and with the same doubting sentiment as found on the front page--grasping at any hope that the news was not true. It begins: "The news of the Vicksburg surrender is not less astonishing than unpleasant. It is the most unexpected announcement which has been made in this war...there is a strong disposition to doubt the authenticity of the dispatch...The last dispatches of Grant...did not foreshadow an immediate fall of the place..." with much more.
Another page 2 article is fascinating reading, headed "Yankee Vandalism & Outrages in King William (county, Va.)" tells how the Yankees wrecked utter devastation in Virginia, while the Confederates were very respectful of personal property in their recent advance to & from Gettysburg. Near the bottom of the piece is: "...The principal performers in this hideous carnival of pillage were, we learn, Pennsylvanians, & no doubt many others in King William have suffered...Our example of leniency & mercy is utterly lost upon such wretches..." . As a bit of historical irony this item is followed by: "Price of Negroes in Texas" beginning: "Negroes are enormously high in Texas...".
Page 2 also has: "The Campaign In Tennessee--The Long Inaction--The Respective Position & Strength of the Two Armies--Plans & Operations of Rozencrans..." with several subheads. Also: "Additional From The North" is mostly taken up with a dispatch from Robert E. Lee, dated at: "Chambersburg, Pa., June 27, 1863" relating to how poorly the Yankees treated Confederate property, signed in type: R. E. Lee, General. This is followed by: "Exchange of Prisoners...".
The top of the last column on the bkpg. has: "Telegraphic News--Latest From The North--General Lee's Army at Hagerstown--A Fight Reported To Be Going On" which includes a dispatch from the Confederate Sec. of War, dated "Martinsburg, July 8, 1863" referencing news from the previous Wed., Thursday, & Friday which would have been July 1, 2 & 3, the days of the Battle of Gettysburg.
This very historic (yet brief) report includes: "From all the reports we gained a decided & telling advantage over the enemy at Gettysburg on Wednesday & Thursday. On Friday we charge his works & took them, but were unable to hold them, & fell back towards Hagerstown. There has been but little fighting since then--So far the victory is on our side....Everything is so indefinite that it is impossible to form a correct idea of the fight...".
This is followed by: "From the Southwest--Banks Reported Repulsed at Port Hudson" and "From North Carolina--Safe Retreat of the Yankee Raiders--the North Carolina Militia Called Out for Home Defense".
Complete as a single sheet newspaper as was typical with Southern newspapers, as most of the paper mills were in the North. Very nice condition.

Follow-up to Gettysburg, & so much mo...