Home > Back to Search Results > Editor takes a rare, pessimistic view of the war...
Click image to enlarge 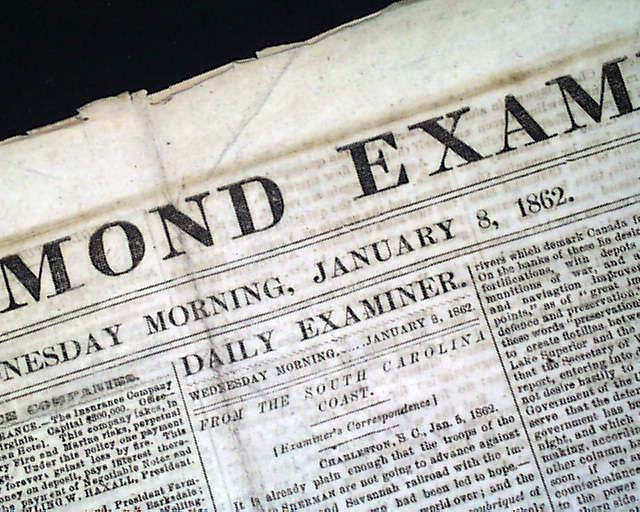 Editor takes a rare, pessimistic view of the war...

A nice newspaper from the Confederacy, and from the capital of the Confederacy as well.
Half of the front page is taken up with ads, plus there is: "From The South Carolina Coast" "Lincoln's Message In Europe--Opinions of the English Press--The Position of England on the Issues Between the North and the South" and "A Chapter of Yankee Frauds".
Page two has a lengthy editorial concerning the war, bits including: "...To all eyes abroad our energies seem to have been palsied by a fatal paralysis...nothing has retrieved our reputation for vigour & capacity by the boldness of our soldiers & the success of our generals in active engagement...This defensive policy has not only cost us men, but it has cost us territory. Many counties of Eastern Virginia & important regions on the more Southern seaboards are now occupied by the enemy..." and much more. Also on pg. 2 is: "The Latest Northern News--Movements & Spirit of the War".
Page 3 has: "War Rumors" "The Indian Treaties in Congress" "The Cotton Famine" "Paper Manufactories" which distresses of the severe lack of paper in the Confederacy; "Telegraphic News" "Patriotic Contribution" and "City Intelligence".
Four pages, never bound nor trimmed, an archival mend near the top of pg. 2, a few small holes caused by a flaw when made, not from wear, generally very nice condition.