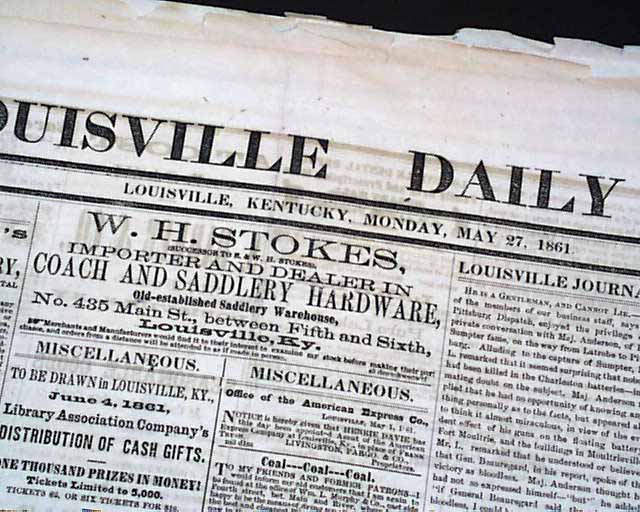 
Louisville is difficult to categorize as Union or Confederate during the Civil War as there were factions within the city supporting both. To placate both sides the two leading newspapers took their stands: the "Courier" was very much pro-Confederate & the "Journal" was more pro-Union.
The ftpg. has an item headed: "The Confederate Appointments" which is a list of: "...appointments (which) have been confirmed by the Confederate Congress", as well as "An Ordinance" for creating a Home Guard at Louisville.
There are other war-related items inside including: "Arming the Union Men" "A Letter From Mississippi" "From Harper's Ferry" "From Camp Shelby" and some other smaller items. Plus page 3 has a somewhat lengthy: "Letter From Senator Douglas", signed by him in type: Stephen A. Douglas.
Complete in four pages, large folio size, loose at the spine, various edge tears with some loss at the edges, a somewhat crude tape mend across much of the back leaf, a few other archival repairs.