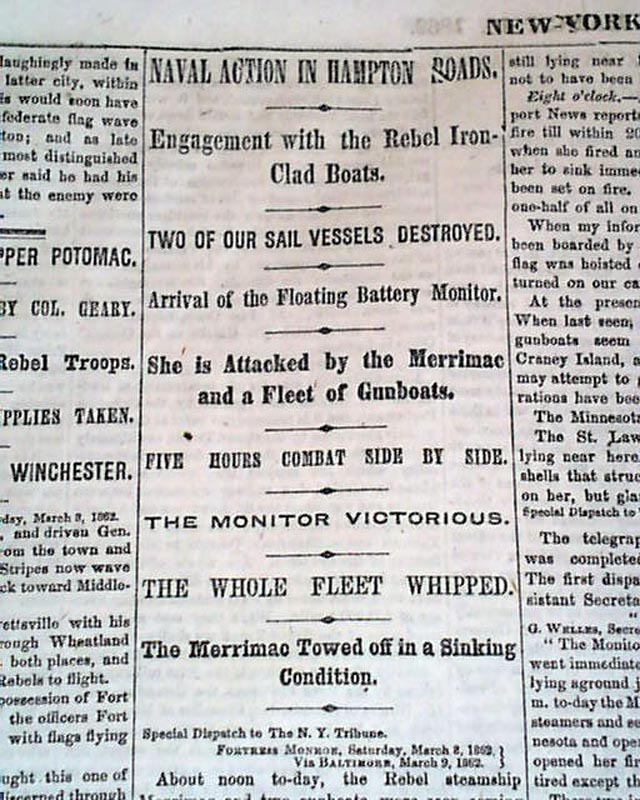 
NEW YORK DAILY TRIBUNE, March 10, 1862  The back page contains two nice Civil War maps headed: "Fernandina, Florida, and Vicinity" and "Scene of Burnside's Operations in North Carolina" as seen in the photos, with not only related column headlines but other Civil War headlines also.
But the prime content is the nice page 5 map headed: "Scene of The Merrimac's Exploits" which shows the Hampton Roads vicinity. There are related one column headlines on the famous battle of the Monitor versus the Merrimac, with the heads including: "Naval Action In Hampton Roads" "Engagement with the Rebel Iron-Clad Boats" "Arrival of the Floating Battery Monitor" "She is Attacked by the Merrimac and a Fleet of Gunboats" "Five Hours Combat Side by Side" "The Monitor Victorious" "The Merrimac Towed off in a Sinking Condition" and more, with a great wealth of text which takes nearly five columns, only portions of which we can show in the photos.
The text includes: "...The Monitor arrived at 10 p.m. yesterday...At 7 a.m. today the Merrimac, accompanied by two wooden steamers...stood out toward the Minnesota & opened fire. The Monitor met them at once excepting the Merrimac. The two iron-clad vessels fought, part of the time touching each other, from 8 a.m. till noon, when the Merrimac retreated. Whether she is injured or not it is impossible to say...The Monitor is uninjured & ready at any moment to repel another attack...". Included in the text is a very detailed description of "The Monitor" as well as "The Merrimac".
A very historic issue.
Eight pages, very nice condition.