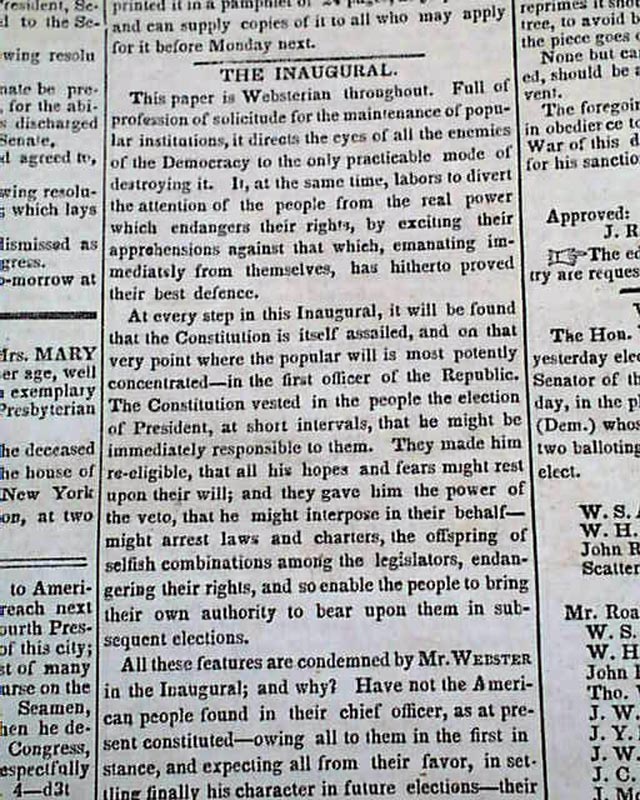 A terrific & very desirable newspaper as this has a same-day report on the inauguration of President Wm. H. Harrison.
Such a report is likely only to be found in a newspaper from the nation's capital, however we have had several issues of the National Intelligencer for this date and they only report plans for the inauguration.
The top of page 3 has reports headed: "In Senate, Thursday, March 4, 1841" with further down the column: "General WILLIAM HENRY HARRISON, President of the United States elect, then entered the Senate chamber...and was conducted to the state assigned for him..." with details on others arriving. Then: "On reaching the portico, the President elect and Chief Justice Taney were conducted to seats in front of a large platform erected for the purpose, and those who followed in the procession having taken their seats, the President elect rose and delivered the following INAUGURAL ADDRESS..." and what follows is the full text, taking over 5 columns.
At its end is: "...The oath of office was then administered to the President of the United States by Chief Justice Taney, and the President concluded his inaugural address as follows:...".
Page 3 also has an editorial headed: "The Inaugural".
Likely the very best Harrison inaugural newspaper to have with this same-day report.
There are at least 3 distinctions of Harrison as President: 1) his inaugural address is the longest on record; 2) he was the first President to die in office; 3) he served as President for the shortest term (31 days).
Four pages, very nice condition.