Home > Back to Search Results > The second of the Lincoln Douglas debates...
Click image to enlarge 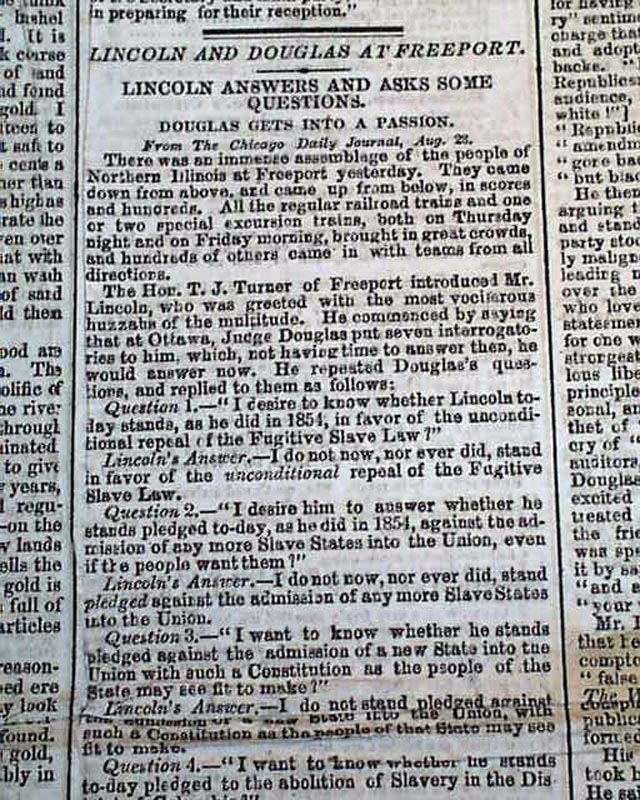 The second of the Lincoln Douglas debates...

We find that reports on the now-famous Lincoln Douglas debates are very difficult to find in newspapers outside of Illinois, perhaps not surprising because it was a senate race in Illinois and Lincoln was, at this time, still a relatively unknown figure in American politics.
However this issue is a rare exception, as page 2 contains a report headed: "Lincoln And Douglas At Freeport" 'Lincoln Answers And Asks Some Questions" which is a report on their second of seven debates.
The report begins with Lincoln's verbatim answers to 7 questions Douglas put to Lincoln in the first debate but could not be answered due to lack of time. After these 7 questions & answers: "Mr. Lincoln then proceeded to explain some of these answers more fully..." with much more. What then follows are 4 questions Lincoln put to Douglas...", with his answers.
Near the end is: "...Mr. Lincoln concluded by cornering Mr. Douglas on the conspiracy charge as effectually as any man has ever been cornered by argument...Mr. Lincoln's half hour expiring, the debate was declared closed, and the people dispersed...".
Some great reading here (see photos for full report).
There are also several slavery-related reports inside as well including: "Official Account of the Capture Of A Slaver By the U.S. Brig Dolphin" "The True History of the Putnam Slaver" "The Re-opening of the Slave Trade--Southern Sentiment" "Barbarism of Slavery--90 Negroes Arrested for Going to Sunday School" and: "The Slave Trade".
Eight pages, some creases at the central fold, slightly irregular at the spine, light damp staining.