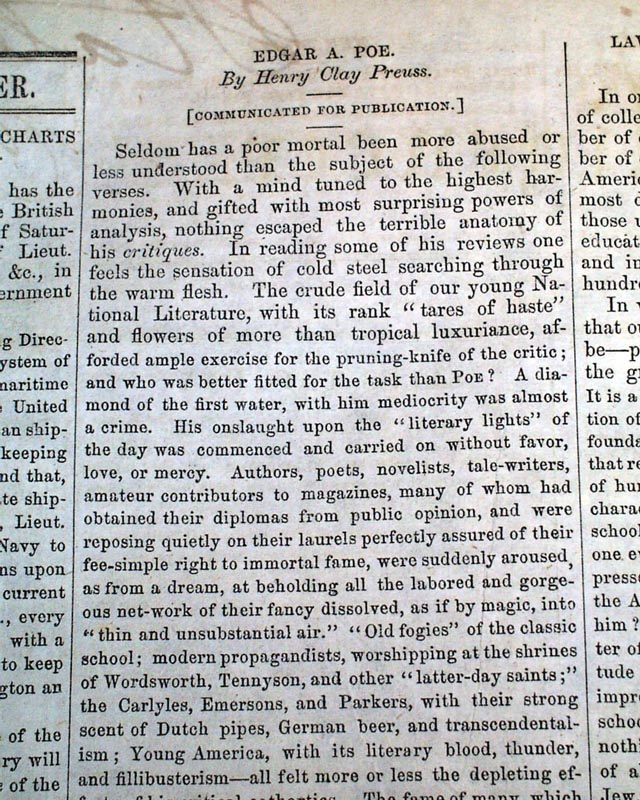 Page 2 has almost an entire column taken up with a very notable article headed: "Edgar A. Poe, by Henry Clay Preuss".
As a bit of background, the following from eapoe.org is very helpful:

“In the decade following Poe’s death, periodical writers on both sides of the Atlantic disputed his place in American letters. From the outset, “practically all criticism began, and as a rule ended, with a consideration of the life and character of the man.”
Students of Poe have long been familiar with the major documents in this war of words, but one suggestive item has escaped scholarly notice: the essay and elegiac poem by Henry Clay Preuss, published in the Washington National Intelligencer on 19 May 1853. At times betraying his own ambivalence about Poe’s alleged frailties, Preuss nevertheless felt compelled to defend the dead author from the denunciations of certain literary pundits. In the process, he framed a resonant tribute to Poe’s genius, appealed for an end of moral judgments, and helped to mythologize Poe as a fated poet.”
The mentioned link deals entirely with the article in this Intelligencer issue, and it is likely it appeared only in this newspaper. Note that the writer references the title and date of the issue.
Four pages, very nice condition.