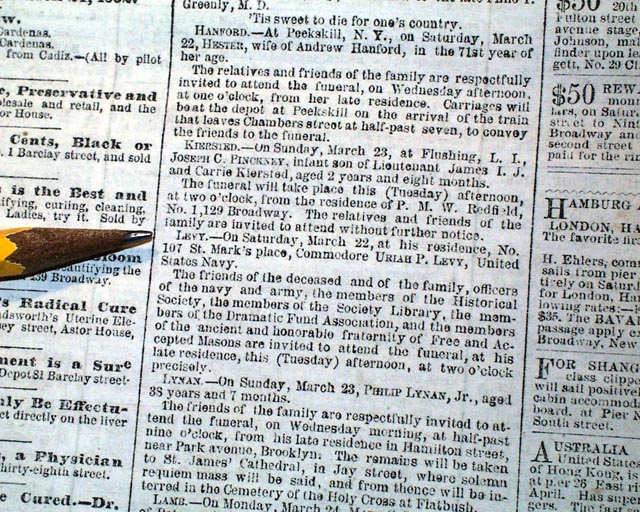 The most notable content within this issue is the very brief, but historic page 7 report of the death of Commodore (Admiral) Uriah P. Levy, the first U.S. Jewish Commodore, war of 1812 war hero, and credited as to having abolished the disciplinary procedure of flogging.
The front page has a map titled: "WHAT GENERAL BURNSIDE HAS ACCOMPLISHED, Scene of Operations of the Coast of North Carolina from Elizabeth City to Beaufort". Also a smaller page 3 map titled: "THE BATTLE IN THE VIRGINIA VALLEY".
Among the one column headlines on the Civil War are: "OPERATIONS ON THE COAST" "What The Navy is Doing" "The Battle In the Virginia Valley" "The Rebels Driven Back to Strasburg" "From The Tennessee River" "Important From North Carolina" "FORT MACON BLOWN UP" "Occupation of Washington" and more.
Complete in twelve pages, nice condition.