Home > Back to Search Results > On the Emancipation Proclamation and the Battle of Antietam...
Click image to enlarge 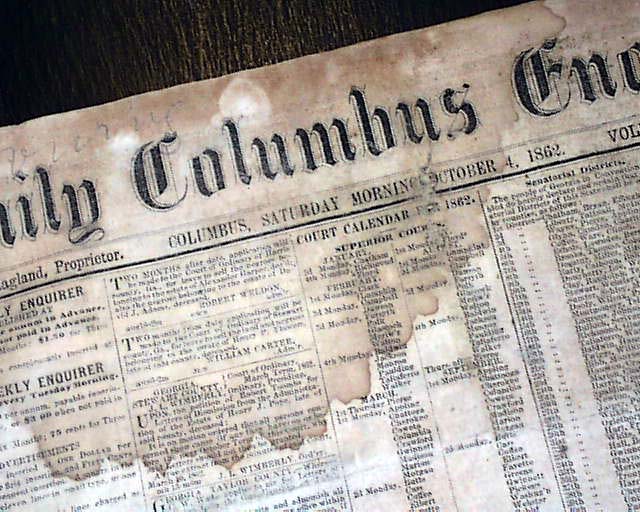 On the Emancipation Proclamation and the Battle of Antietam...

Certainly one of the less common Confederate titles from the Civil War. Columbus is in Southwest Georgia on the Alabama border very near Montgomery.
Among the various reports inside are: "Lincoln's War Policy" "Comments of the Northern Press on Lincoln's Abolition Proclamation" which concerns the recent Emancipation Proclamation; "A Fighting Regiment" "Progress & Events of the War" "Condition of Affairs in the West--The Strength of the Confederate Army" "Affairs in South-Western Missouri" "From Beyond the Mississippi" and more. Page 2 also has nearly half a page on: "The Battle of Sharpsburg" [Antietam] (see).
Most of the back page is taken up with the: "Constitution of the State of Georgia, Ratified July 2, 1861".
Four pages, even toning, damp staining at the top, some wear at a central fold, otherwise good.