Home > Back to Search Results > Americans need to produce their own goods... Creeks vs. Choctaws...
Click image to enlarge 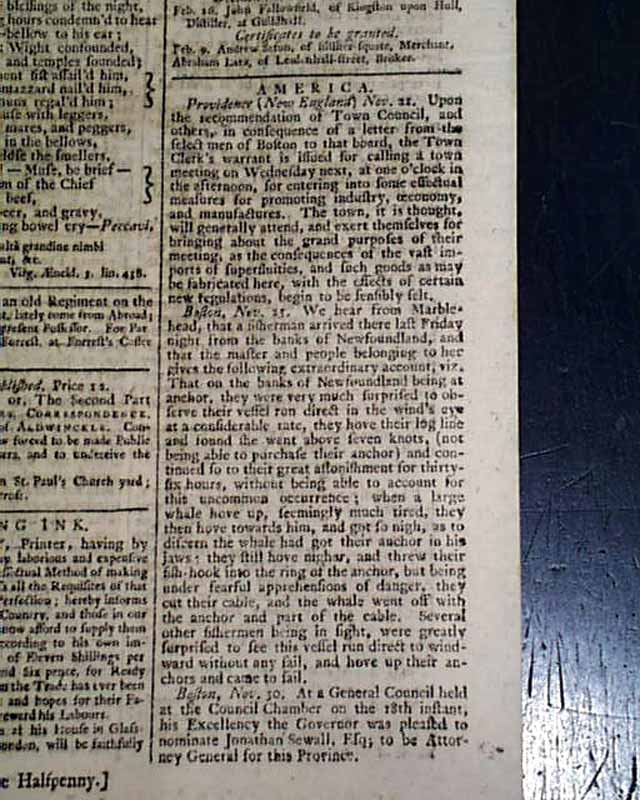 Americans need to produce their own goods... Creeks vs. Choctaws...


THE LONDON CHRONICLE, Jan. 21, 1768  The front page has over half a column of reports headed: "America", carrying over to page 2, with datelines from Providence and Boston. The first report is on a call for a meeting to promote industry & manufacture so as to not depend as much on foreign imports due to the taxes. Another item mentions: "...that the inhabitants have had town meeting and have approved of the resolutions of this town for promoting frugality & encouraging manufactures, and have resolved to follow the same." Other American news bits as well.
Page 6 has a report from Charleston concerning the battles between the Choctaw and Creek Indians, including: "...The Choctaws blame a white man, a trader, for betraying them to the Creeks...declare the Choctaws behaved with great bravery...rushed in among the thickest of their enemies, knocking them down with their tomahawks...".
Also: "We are informed that...the real state of North America...is that of dutiful acquiescence in the regulations made by the British government. The Commissioners of the Customs have been received at Boston with proper respect...".
Eight pages, 8 3/4 by 11 1/2 inches, wide, never-trimmed margins, very nice condition.
Complete in 8 pages, 9 by 12 inches, minor rubbing, nice condition.