Home > Back to Search Results > Lou Gehrig gets special election for Hall of Fame...
Click image to enlarge 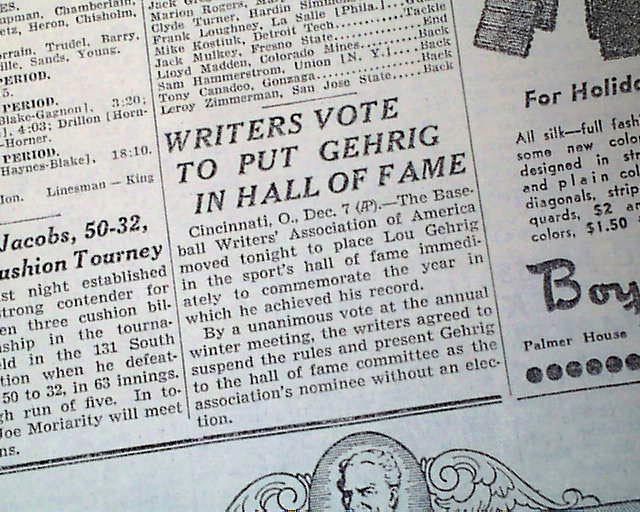 Lou Gehrig gets special election for Hall of Fame...

Page 37 has a small and somewhat inconspicuous one column heading: "Writers Vote To Put Gehrig In Hall Of Fame" (see)
Other news, sports and advertisements of the day. Complete with all 46 pages, rag edition in nice condition. A few small binding holes along the spine.

wikipedia notes: During a winter meeting of the Baseball Writers' Association on December 7, 1939, Gehrig was elected to the National Baseball Hall of Fame and Museum in a special election related to his illness. At age 36, he was the youngest player to be so honored to date (that figure was surpassed by Sandy Koufax in 1972).[83] He never had a formal induction ceremony. On July 28, 2013, 11 other deceased players and he, including Rogers Hornsby, received a special tribute during the induction ceremony, held during "Hall of Fame Induction Weekend", July 26–29 in Cooperstown, New York.