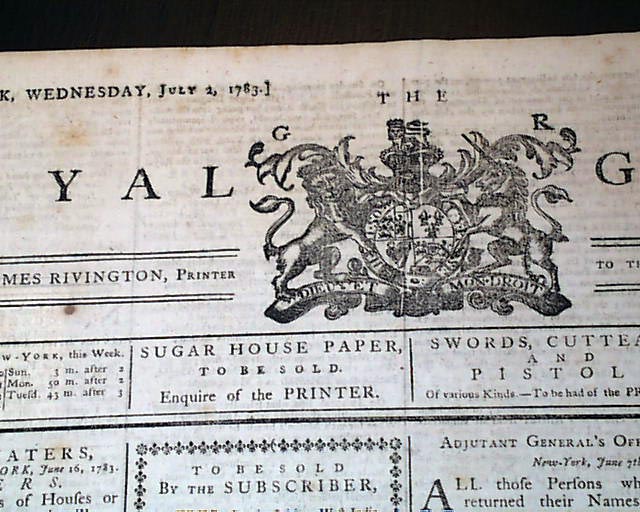 This is a case where the rarity of the title surpasses the content within. This was a Tory newspaper by the infamous James Rivington who was supportive of the British cause.
Rivington's initially impartial stance shifted as the revolution loomed and public opinion polarized, until by late 1774 he was advocating the restrictive measures of the British government with such zeal and attacking the patriots very severely.
The Sons of Liberty hanged Rivington in effigy. On May 10, 1775, immediately after the opening of hostilities, the Sons of Liberty gathered and mobbed Rivington’s home and press. Rivington fled to the harbor and boarded a British man-of-war. Assistants continued to publish the Gazetteer, but in spite of a public assurance of Rivington's personal safety from the Committee-Chamber of New York, various New York radicals entered Rivington's office, destroyed his press and converted the lead type into bullets. Another mob that day burned Rivington's house to the ground. Rivington and his family then sailed for England.
In 1777, after the secure British occupation of that city, he returned with a new press and resumed the publication of his paper under the title of "Rivington's New York Loyal Gazette", which he changed in December to "The Royal Gazette", with the legend “Printer to the King’s Most Excellent Majesty” in the masthead.
Rivington would now become a spy for the Continentals, furnishing General Washington with important information.
The date of Rivington's secret change of heart is disputed but when New York was evacuated in November, 1783, Rivington remained in the city, removed the royal arms from his masthead, and changed its title to "Rivington's New York Gazette and Universal Advertiser".
The front page begins with a document concerning the houses or lands recently evacuated as the Loyalists left New York. And another similar document concerning the process for turning in the names of those leaving.
Page 2 has a notice of a book concerning Lord Cornwallis's actions in the American campaign. Then: "A PROCLAMATION" signed by Elias Boudinot, President of the Continental Congress at the time, concerning the violent protests by dissatisfied and unpaid Revolutionary War veterans in Philadelphia. These troubles would cause the nation's capital to relocate to Princeton for about four months.
Four pages, great condition.