Home > Back to Search Results > Non-importation issues, and more trouble brewing in the colonies...
Click image to enlarge 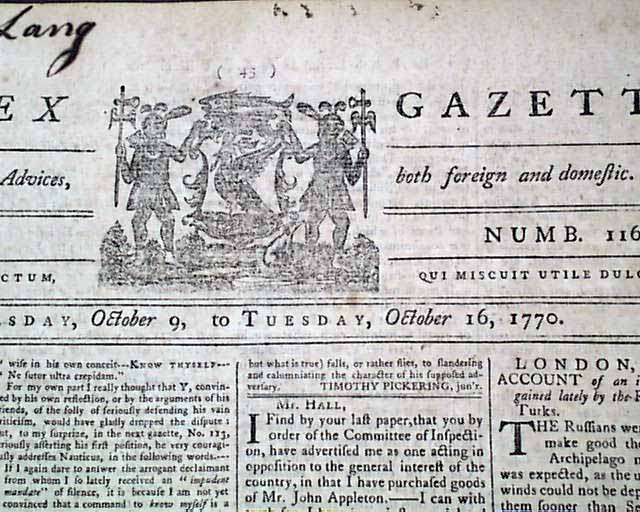 Non-importation issues, and more trouble brewing in the colonies...


THE ESSEX GAZETTE, Salem, Massachusetts, Oct. 16, 1770  Page 2 has some reports relating to the growing tensions between the American colonies & England, including: "Our able rulers have, at last, come to a determination to force slavery on the colonies with the sword...a squadron is to block up the harbour of Boston & a land force is to march into the town under the pretense of supporting the officers of the revenue in the discharge of their duty..." with more.
Also an item mentions: "...is sailed for Boston with orders...to pursue violent and coercive measures in order to reduce those rebellious American to proper subjection." A report from Boston notes in part: "...meeting of the merchants...was unanimously voted to alter the Non-Importation Agreement & to open the importation of goods from Great Britain except Teas & such other articles as are...for the purpose of raising a revenue in America." Also some reporting on merchants in Phila. considering the non-importation issue.
The back page has a report from London: "The affairs of America grow every day more & more embarrassing. The union among the colonies is very alarming. Force attempted against one colony will be resented as force aimed against the whole; and as the people are growing rich, they in proportion grow sturdy." And a back page report from Boston concerning the training of the soldiers & noting: "...very attentive to this exercise & perfected themselves in such a manner as to be a credit to the Province when they appear in the field. The spirit & zeal which the officers...sew, and the pains they take to learn the exercise & other parts of their duty are very extraordinary & do them great honor...".
Four pages, handsome engraving in the masthead, subscriber's name penned at the top, nice condition.