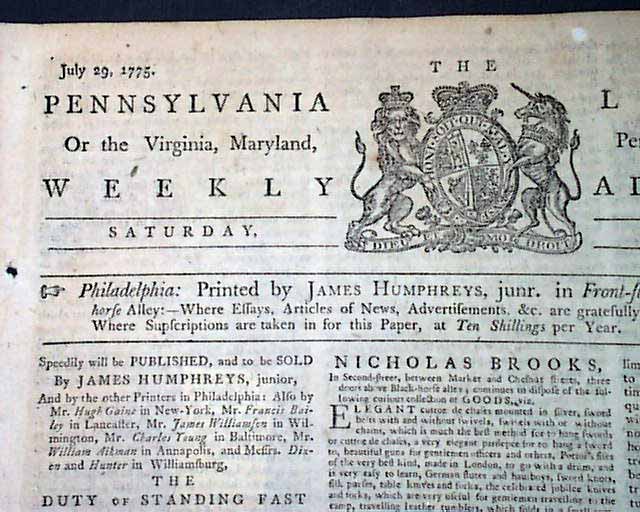 Page 2 has an interesting report from London which includes: "My Lords, whatever has been done by the Americans, I must deem the more consequence of our unjust demands. They have come to you with fair argument, you have refused to hear them, they make the most respectful remonstrances, you answer them with pains & penalties; they know they ought to be free, you tell them they shall be slaves. Is it then a wonder if they say in despair, 'for the short remainder of our lives we will be Free!'...".
There is a short letter signed by: Charles Lee, concerning: "...accounts from Salem touching an engagement between the King's troops and the Provincials in the Massachusetts Bay...". Elsewhere is: "It is said Lord North, when he received the unhappy news that the provincials had defeated Gen. Gage's troops, he was struck with astonishment, turned pale, and did not utter a syllable for some minutes." And: "All the colleges in New-England, having been voluntarily resigned by the students & turned into barracks for the provincial troops." Another letter includes: "...no doubt receive...an account of the late most lamentable disturbance at Lexington. To the list of the killed you may add Lt. Col. Smith...Lord Percy very narrowly escaped being taken by the Provincials...Our situation is daily more irksome...Our marines are almost always in arms...The Provincials who attacked General Gage's convoy of provisions were headed & commanded by a dissenting clergyman....".
Page 3 has much concerning the war including: "From the King's troops having first fired on the Americans & thus designedly commenced hostilities, there is every apparent reason to conclude that the private instructions to the troops are to shed blood enough. To men of thought there is nothing surprising in the late American massacre...". Plus there is much, much more on page 3 regarding the Revolutionary War that I thought it best just to show them in the photos, including a letter from the "Committee of Safety" at Philadelphia which is signed in type by its president: B. Franklin.
A great wealth of fine content relating to the Revolutionary War. Four pages, Royal coat-of-arms in the masthead, light damp stain to the bottom portion, numeric notations in margins next to ads (was the editor's copy), generally very nice condition.