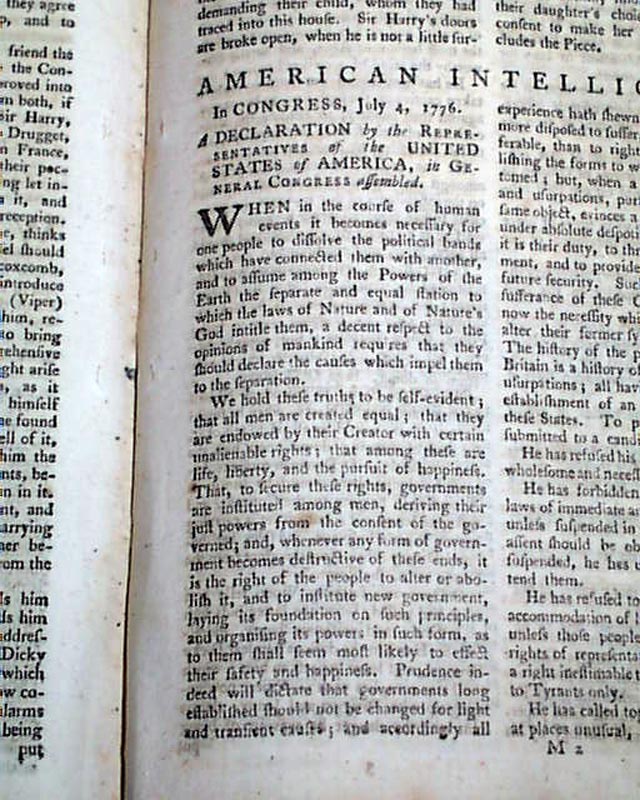 It would be difficult to argue for a more important document in American history than the Declaration of Independence. It remains a desire of most collectors to find issues containing reference to it, and ultimately a contemporary printing of the actual document.
With American newspaper printings commanding $100,000 or more in nice condition--if available--here is an opportunity for a period printing at a very reasonable price.
And this is one of the less common magazine titles of the 18th century. More typically when we come across this document it is in the "Gentleman's Magazine" from London, but this is the much more scarce "Universal Magazine" although formatted very much like the Gentleman's.
The Declaration has a banner headline: "AMERICAN INTELLIGENCE" beneath which is: "In Congress, July 4, 1776" "A Declaration by the Representatives of the United States of America, in General Congress Assembled" followed by the complete text beginning with the famous words: "When in the course of human events...". The document concludes two pages later and is signed in type by: John Hancock.
One can imagine the reaction in England to those reading this report in their own magazine.
Further on in the issue are many reports of the on-going war, particularly in the New York City vicinity, taking several pages. Portions are shown in the photos.
Included is the foldout plate: "The Water-fall at Tivoli in Italy" as well as another full page plate.
Certainly a keystone issue for any collection of American history.
There is no full page title/contents page for the month, however it does have the very decorative and full page title page for the volume. Otherwise complete in 58 pages, very nice condition.