Home > Back to Search Results > Responding to the British peace commissioners...
Click image to enlarge 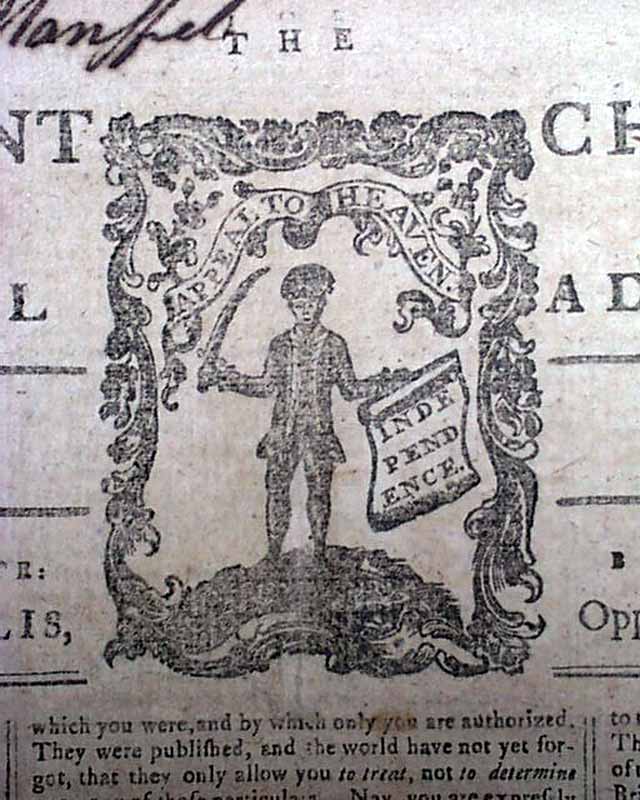 Responding to the British peace commissioners...

A very handsome issue as the masthead features an engraving taken from one done by Paul Revere for colonial currency at the time. It is a very patriotic device showing a soldier with a sword in one hand and a scroll with 'Independence' in the other, with the words 'Appeal To Heaven" above him.
The entire front page and most of page 2 are taken up with a terrific letter to the British peace commissioners attacking their proposals for attempting to establish a peace agreement with the colonies. This became more of an issue for the British once the French agreed to become allies with the colonies, with one bit on the front page including: "...I will be short: nay, I will use but a single word. INDEPENDENCE! This is proposed by the alliance with France: This is not to be found in your offers..." and much, much more.
More war content including an item on Washington withdrawing his army from White Plains to Danbury, Fredericksburg & Peekskill. Also a report concerning the German flats area of the Mohawk Valley said to have been burned over.
Four pages, the subscriber's name penned at the very top, in very nice, clean condition.