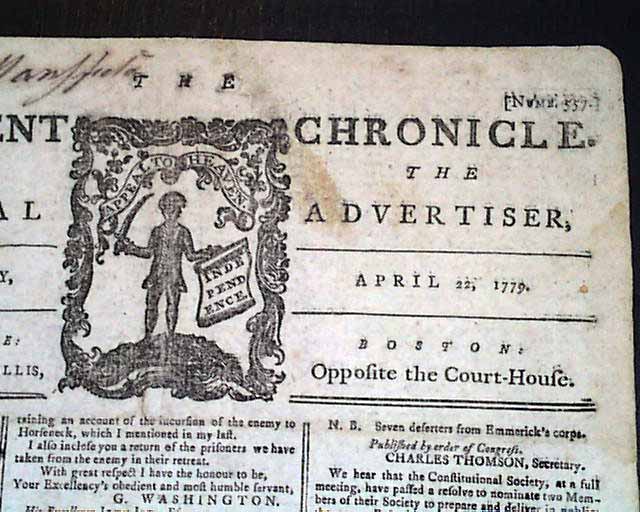 A very handsome issue as the masthead features an engraving taken from one done by Paul Revere for colonial currency at the time. It is a very patriotic device showing a soldier with a sword in one hand and a scroll with 'Independence' in the other, with the words 'Appeal To Heaven" above him.
The front page begins with a letter concerning the situation in Canada. It is followed by a letter signed in type: G. Washington, datelined: "Head Quarters, Middlebrook, March 8, 1779" which is a letter of introduction concerning another lengthy letter by General Putnam and the prisoners taken at the battle of Horse Neck, with details of the battle as well. The front page also has a: "...genuine letter from a refugee officer in New York, & may shew not only the misery of their situation, but how the traitors against their native country are considered by those whom they have joined."
Page 2 has a report from Charleston concerning military events near Adam's Ferry, as well as a letter: "To the Respective Legislatures of the United States of America" which begins: "The treaty which is to stop the effusion of blood amongst us..." with some interesting content.
Page 3 has a letter that begins: "American in my opinion stands upon high ground...".
Four pages, very nice condition.

A "call to arms" for Londoners in sup...