Home > Back to Search Results > Taxing without representation...
Click image to enlarge 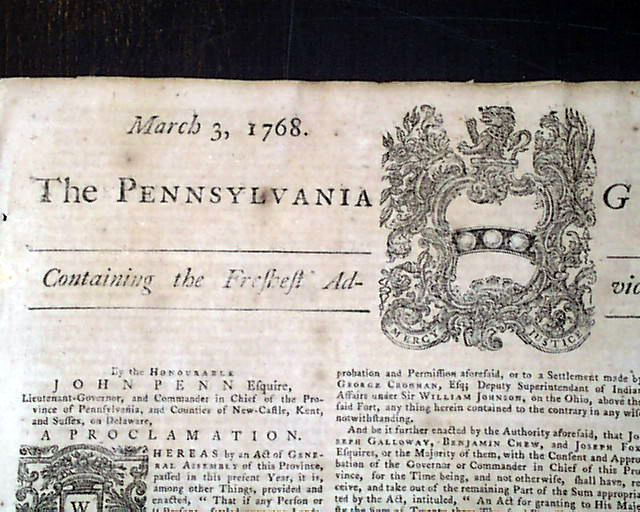 
THE PENNSYLVANIA GAZETTE, Philadelphia, March 3, 1768  The masthead features a very ornate coat-of-arms, the early version of the state seal.
The top of the front page has: "A Proclamation" signed in type by the Lt. Governor & Commander in Chief of Penna., John Penn, concerning those settling in Penna. without permission or ownership of land, etc. This is followed by a related Act titled: "An Act to remove the Persons now settled, & to prevent others from settling on any Lands in this Province not purchased of the Indians".
Page 3 has an item from Boston noting in part: "...the House of Representatives...have preferred a humble, dutiful & loyal Petition to the King imploring his Majesty's gracious protection of their constitutional & charter rights, which are thought to be infringed by several Acts imposing duties to be levied on their constituents without their consent in Parliament..." with more.
Four pages, some foxing spots, very nice condition.