Home > Back to Search Results > A very famous newspaper... Fine issue on the battles of New York and Long Island...
Click image to enlarge 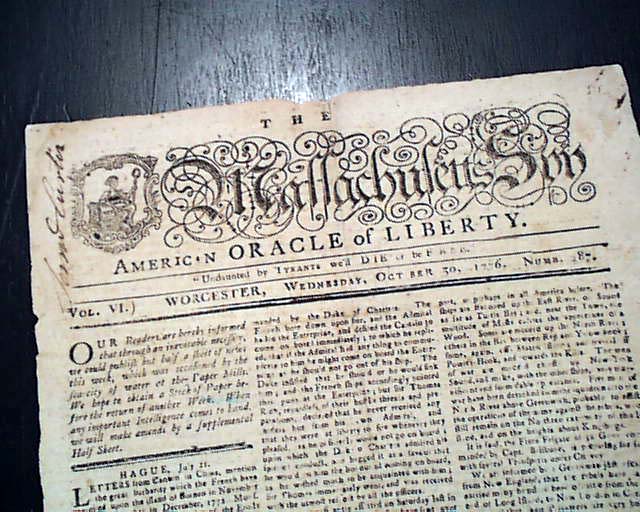 A very famous newspaper... Fine issue on the battles of New York and Long Island...


THOMAS'S MASSACHUSETTS SPY OR, AMERICAN ORACLE OF LIBERTY, Worcester, Oct. 30, 1776  This newspaper published by the famed Isaiah Thomas is undoubtedly one of the more significant & notable titles of the Revolutionary War era.
It is worth noting that the famed printer Isaiah Thomas was the publisher, having begun this newspaper in 1770. An ardent patriotic, as the extended title to his newspaper would suggest: "...Or American Oracle of Liberty", Thomas was a constant target of the Royalist government. He began his newspaper in Boston but upon British occupation of the city in 1775, rather than cease publication he moved his press further west and continued printing in Worcester. This issue is one that was printed in Worcester.
Also, the handsomely engraved masthead was created by none other than Paul Revere, who did masthead engravings for but a few New England newspapers of the 18th century, this arguably being his most famous.
The front page has a very notable report from New York beginning: "His Majesty's forces are now in possession of the City of New York Island. They are also in possession of Powles Hook and command the East River and Connecticut Sound. All this has been obtained with very little difficulty and loss...the rebels, after the battle, or rather rout of the 27th of August, [the Battle of Long Island] having never attempted to face the soldiers but fled every way with the utmost precipitation. They quitted works...The King's forces are in remarkable good health & spirits...So vast a fleet was never seen together in this port, or perhaps in all America before...".
This historic report carries on to mention the burning of New York City and other actions in the Long Island and Manhattan vicinity.
Page 2 has a report from South Carolina concerning a skirmish there. Then: "Accounts from our army at New York..." which has some detail on the Battle of Long  Island, and also that: "The enemy have extended themselves this way as far as New Rochelle and small parties of them have advanced as far as Marineck..." and then further on: "...we have the following particulars from our lines near New York...That on Monday last a party of Tories, about 100 in number some of whom came from Long Island under the command of the infamous Major Rogers, made an attack upon an advanced party of our men when a smart engagement ensued..." and more, with action near White Plains, and then also a letter from Harlem with details.
A letter from Ticonderoga begins: "The enemy are in possession of Crown Point...".
Then a letter from an officer at New York notes: "We have retreated from Bergen...We are now posted at Fort Constitution, about 14 miles above the city of New York. Opposite to us is Fort Washington..." and much more, ending with: "...We hear the enemy have left their lines at Harlem." This report is followed by two military desertion notices.
This is s single sheet newspaper, as issued and as clarified at the beginning of the front page: "Our readers are hereby informed that through an inevitable necessity, we could publish but half sheet of news this week, which was occasioned by the scarcity of water at the paper mills..." with a bit more.
Never-trimmed margins, the back page was printed a bit askew causing 5 ads to lose some letters but not affecting any text or mentioned reports. A bit of archival work at margins and the central fold, nice condition.