Home > Back to Search Results > On the Battle of Bunker Hill... Washington named commander-in-chief.. So much more....
Click image to enlarge 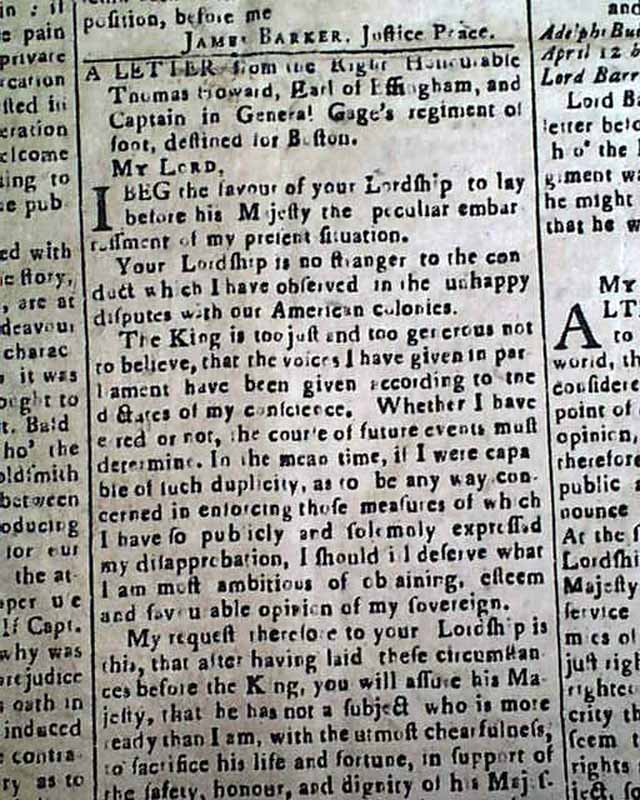 On the Battle of Bunker Hill... Washington named commander-in-chief.. So much more....


THE CONNECTICUT JOURNAL & THE NEW HAVEN POST-BOY, July 5, 1775  Nice engraving in the masthead of a post boy on horseback.
The front page has a letter from an officer in General Gage's regiment heading for Boston, which details his reason for wanting to retire, noting: "...As I cannot, without reproach from my own conscience, consent to bear arms against my fellow subjects in America, in what to my discernment is not a clear cause...".
Also on the ftpg. is a letter signed by Charles Lee, declining an offer from the British Secretary of War for a half-pay position. He would sign on to the colonial forces, expecting to be named commander-in-chief, a position that would go to George Washington (see below for the report on pg. 3).
But certainly the most notable content is at the beginning of page 2 with reporting relating to the Battle of Bunker Hill. With a dateline of "Cambridge, June 29", the report includes: "A man of reputation whose name is King, was in Boston at the time of the battle on the 17th...he took the opportunity to make his escape to Marblehead...He informs that from sunset on the day of battle until next morning, wounded regulars were brought over in boats to the amount of at least 500; that 30 of them had died before they arrived at the hospital; that 84 officers were killed & wounded, three of them are field officers; and the whole of the killed & wounded amounted to 13 or 1400...other accounts confirm Mr. King's intelligence & give us great reason to conclude that the havock among the ministerial troops was very considerable...at the most is supposed to be from 150 to 200 killed and wounded. Major General WARREN, late President of the Provincial Congress, is among the slain..." with more, including much more concerning the death of General Warren.
Also included: "...Since the battle of the 17th inst. a considerable body of the army have been employed in fortifying Prospect Hill, Winter Hill, & other eminences near Charlestown. The former...and in full view of the enemy on Bunker Hill, is said to be almost impregnable..." with more on this.
Page 2 has a terrific letter to Lord Dunmore, governor of Virginia, datelined "Williamsburg" & which includes: "...that a benevolent tender had at length been made by the British...towards bringing to a good end our unhappy disputes with the mother country...we should consider a reconciliation as the greatest of all human blessings..." but then goes on to state why the plan will not work, noting in part: "...it only changes the form of oppression. We cannot...close with the terms of that resolution for these reasons..." with much more on this. The short response from the governor notes: "It is with real concern I can discover nothing in your address that I think manifest the smallest inclination to, or will be productive of, a reconciliation with the mother country."
A report notes: "Another account assures us that the celebrated Dr. Franklyn (sic) is gone over with full powers in his pockets to settle matters with the Americans at the Congress."
Another very significant report states: "The following is the staff lately appointed by the Continental Congress: George Washington, Esq. of Virginia, General and Commander in Chief of all the American forces. Artemus Ward, Esq. of the Massachusetts bay, Charles Lee, Esq. of Pennsylvania, Philip Schuyler Esq. of Albany, in New York province. Israel Putnam of Connecticut to be Major Generals..." with more.
The bkpg. has a report from London which is prophetic: "By the last accounts from America there is too much reason to fear we shall hear of some bloody actions by the next...an event that would, in all probability, tear the whole American continent for ever from the British Crown..." & more. How true this would prove to be.
Four pages, never bound nor trimmed, a bit of foxing, printed on much sturdier stock than typical, quite nice condition.