Home > Back to Search Results > Major Andre's letter on being captured... Battle of King's Mountain...
Click image to enlarge 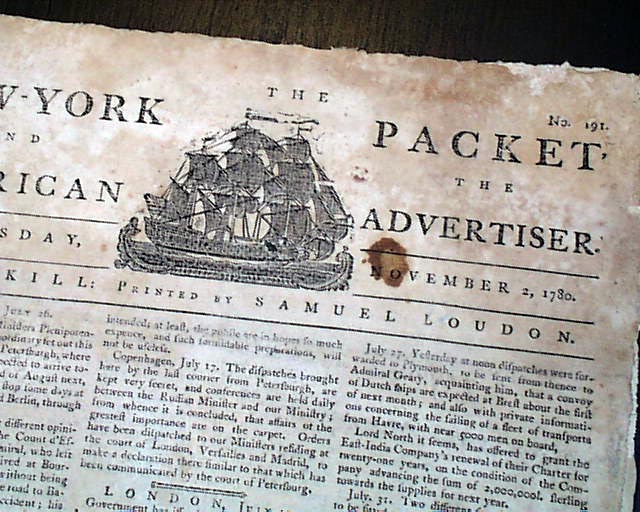 Major Andre's letter on being captured... Battle of King's Mountain...


THE NEW-YORK PACKET and the AMERICAN ADVERTISER, Fishkill, Nov. 2, 1780  This is a very rare title, in fact our database indicates this is the first we have offered. And it's a handsome newspaper as well with a very detailed engraving of a ship in the masthead.
It has a curious history.
It began publication in New York City Jan. 4, 1776 but was suspended with the issue of Aug. 29, 1776 just prior to the entry of the British into the city. The printer re-established the paper at Fishkill in January, 1777 and at the close of the war returned it to New York.
Brigham notes that of the 21 American institutions which have holdings of this newspaper only 5 have this date.
Beyond the rarity of the title, the content is great. Page 2 has a report concerning Col. Ferguson and Jethro Sumner's actions in the Carolina, including a letter signed in type by: Horatio Gates which begins: "This instant I received the great & glorious news contained in the inclosed letter from Brig. General Davidson to General Sumner...We are now more than even with the enemy...". Then some nice reporting on the Battle of King's Mountain, North Carolina, including a letter signed: Jethro Sumner which begins: "With great satisfaction I inform you of the defeat of Major Ferguson on King's Mountain...".
Page 3 has a report from Poughkeepsie concerning: "...that after the repulse of the enemy by the militia & levies under Brig. Gen. Van Rensselaer at Fox's Mills...Our troops pursued the main body of the enemy up the Mohawk River..." with much more detail.
Perhaps the best report is a page 3 letter to General Henry Clinton signed in type by: John Andre, in which he reports his capture by Washington's troops in the failed attempt, in conjunction with Benedict Arnold, to surrender West Point to the British. His letter mentions in part: "...doubtless already apprized of the manner in which I was taken...I have obtained General Washington's permission to send you this letter...I am perfectly tranquil in my mind, and prepared for any fate to which an honest zeal for my King's service may have devoted me..." with more.
Four pages, never bound nor trimmed, an ink spot in the masthead, a bit of professional archival work in spots but not affecting any text, generally in nice condition.