Home > Back to Search Results > The Gettysburg Address in a Pennsylvania newspaper...
Click image to enlarge 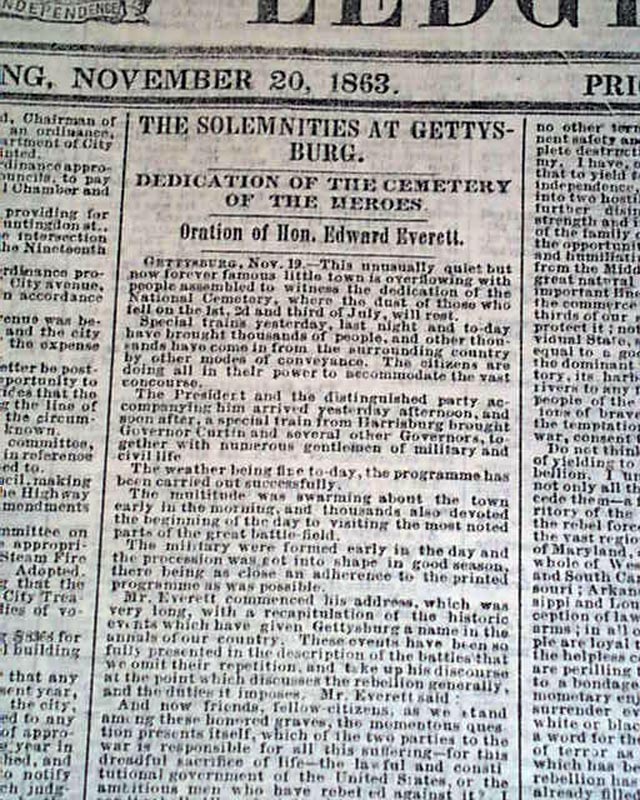 The Gettysburg Address in a Pennsylvania newspaper...

The front page has over two columns taken up with: "The Solemnities At Gettysburg" "Dedication of The Cemetery Of The Heroes" "Oration of Hon. Edward Everett".
As many know, Everett was the keynote speaker at the ceremonies, and he droned on for two hours. Page 2 has some additional reporting on the event under: "The Gettysburg Ceremonies" and: "The Dedication" where is found, somewhat inconspicuously: "...After the performance of the funeral, military dirges by Birgfeld's band, an eloquent prayer was delivered by the Rev. Wm. Stanton. The President then delivered the following dedicatory speech:" and what follows is the immortal Gettysburg Address which lasted less than 3 minutes, but would eclipse Everett's forgettable address and go down in history as one of the most significant speeches in American history.
His address is printed here in full, followed by: "Three cheers were given for the President of the United States and Governors of the states. After the delivering of this address, the dirge and benediction closed the exercises and the immense assembly separated...".
Great to have this notable speech not only in a Pennsylvania newspaper, but from a city just 140 miles for Gettysburg.
Four pages, a very discrete archival mend on page 2, great condition.