Home > Back to Search Results > Fine accounts of the Battle of Fort Washington...
Click image to enlarge 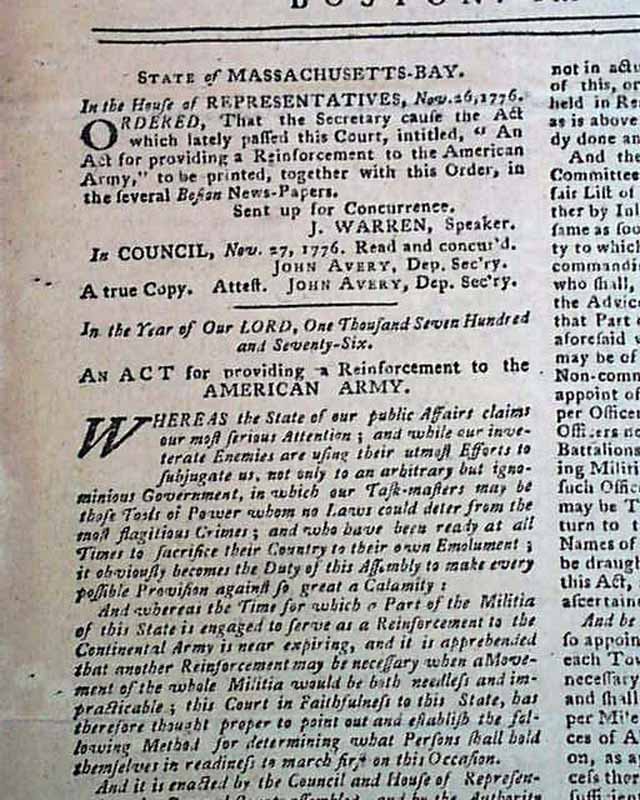 Fine accounts of the Battle of Fort Washington...

Certainly a nice Revolutionary War newspaper for display as the entire front page is taken up with: "An ACT for Providing a Reinforcement to the AMERICAN ARMY." by the state of Massachusetts Bay.
Page 2 has an overly optimistic letter beginning: "By this time we judge the capital events of the American armies are over, & from the silence observ'd in the court of London every body imagines the King's troops have been worsted...".
Page 3 begins with items reporting: "A treaty of alliance was lately formed at Fort Pitt with the Delaware, Mingoes and Shawanese..." and "A return of the killed & wounded in the engagement at Mount Washington is not yet arrived. It is certain the enemy have paid very dear for it as from the best accounts, it appears they have at least 2000 killed & wounded...".
This was the Battle of Fort Washington, with a more detailed account of this battle a bit further on, providing some nice detail. Near the end is: "...authentic intelligence from officers of the first rank in our army, we hear that four days after the surrender of Fort Washington the enemy landed a large body of troops on the Jersey shore below Dobb's Ferry & advanced very rapidly to Fort Lee..." with more detail. Then further on is a letter beginning: "I  am sorry to acquaint you of our ill success at Fort Washington, but we have the great consolation that our troops behaved well--Howe invested the lines with his whole army...They never quitted the lines until the enemy were in the entrenchments..." and more.
Four pages, scalloped at the bottom affects 2 words of text on pg. 3 and two more on page 4, otherwise in very nice, clean condition.