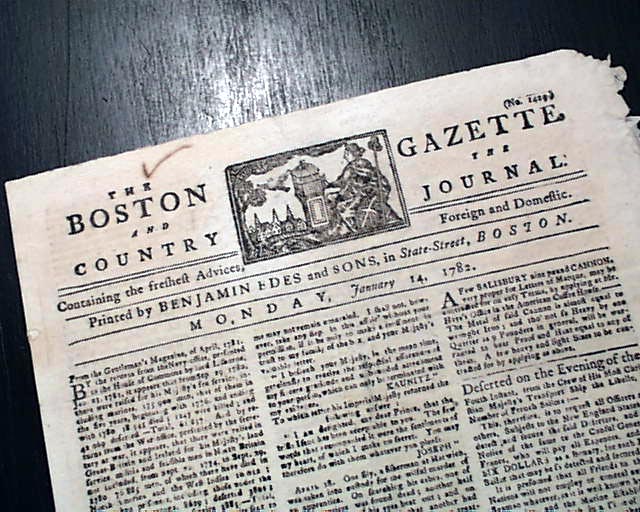 
THE BOSTON GAZETTE & COUNTRY JOURNAL, Jan. 14, 1782  This newspaper is famous for the patriotic engraving in the masthead--engraved by Paul Revere--which shows the liberty figure setting the "dove of peace" free from its restraining cage over the skyline of Boston. This Revere engraving was used for a limited number of years.
The front page begins with an accounting of the military in the British service which also includes: "...of which there have died in North America & the West Indies 10,012; been taken prisoners including those under the convention of Saratoga, 8620; deserted 3801..." with more. The front page also has an ad for French sailors who deserted their ship.
Page 2 begins with a proclamation from the Mass. governor requiring all to assist in the capture of French sailors who deserted, signed in type: John Hancock. Also on page 2 is a report from Fort Pitt concerning skirmishes with the Moravian Indians. And a report that: "...Gen. Leslie, who commands at Charlestown, has requested of Gen. Clinton 900 men to enable him to hold that place...Five men from Arnold's corps have deserted to us in the course of the last week."
Page 3 has a lengthy report concerning the events in the Caribbean that relate to the Revolutionary War.
Complete in four pages, never bound nor trimmed with the original, wide, deckle margins, in great condition and nicely inked. A great display issue as such.