Home > Back to Search Results > Putting the Constitution into effect, & New York is the capital...
Click image to enlarge 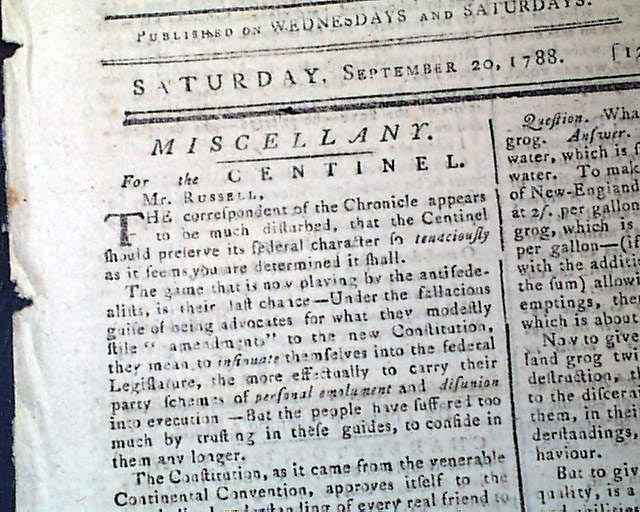 Putting the Constitution into effect, & New York is the capital...

The top of the front page has an article signed by: "A Federalist" which is very supportive of the new Constitution, then being considered for ratification by the various states. It notes in part: "...The game that is now playing by the antifederalists is their last chance--Under the fallacious guise of being advocates for what they modestly stile 'amendments' to the new Constitution...The Constitution, as it came from the venerable Continental Convention approves itself to be unprejudiced understanding of every real friend to America...".
Page 2 has a letter beginning; "The celebrated writer of Common Sense compared the marches & countermarches of Gen. Howe in America to 'a dog running after his tail'..." and a bit further on is: "...The proposed amendments, Mr. Russell, have effected the purpose for which they were intended--i.e. conciliation..." with more. This is followed by an article titled: "The Morality of Slavery".
Page 3 has an item beginning: "In the year 1783 Dr. Franklin used to give publick dinners once a week at his hotel at Passy near Paris..." with more.
Another item has a very historic report noting: "Yesterday the business in Congress was decided, relative to the ordinance for putting into operation the new government of the United States. New York is determined upon as the place of their meeting in March next. Ten states voted and all unanimous--Rhode Island, Delaware and North Carolina did not vote."  The capital would later move to Philadelphia in 1790, and then to Washington, D.C. in 1800.
Also: "Congress has issued a Proclamation forbidding all unwarrantable & hostile proceedings against the Cherokee Indians...".
Four pages, never-trimmed margins, very nice condition.