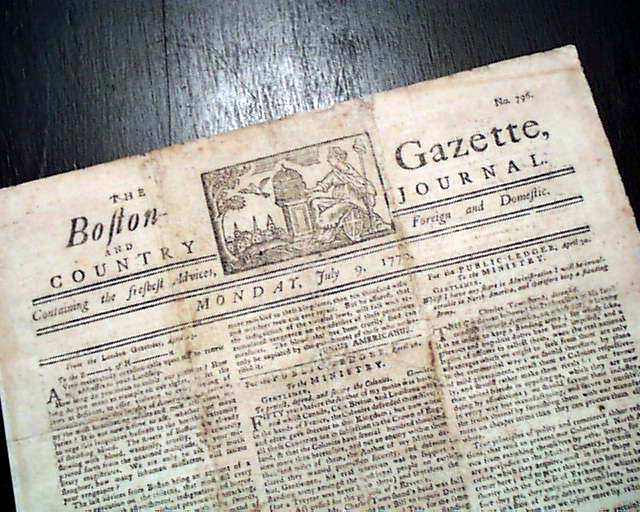 
THE BOSTON GAZETTE, July 9, 1770  This newspaper is famous for the patriotic engraving in the masthead--engraved by Paul Revere--which shows the liberty figure setting the "dove of peace" free from its restraining cage over the skyline of Boston. This Revere engraving was used for a limited number of years.
The issue has a wealth of reflection & commentary upon the recent Boston Massacre. And terrific to have this content in a Boston newspaper.
The front page begins with an angry letter signed by: "Junius Americanus" which includes: "A very melancholy occasion calls upon me to review my address to your Lordship. How long do you mean to insult our patience? How long do you mean to trample on our rights...It is not now a time to ask, whether you mean to urge this iniquitous business to the horrible extremity of shedding blood. The streets of Boston are already flowing with blood, wantly, cruelly...We are only to ask how much slaughter, how many inhuman massacres, will satiate your vengeance?. The last advices from Boston bring an account of a military execution on the citizens that must fill every feeling breast with astonishment, indignation, and horror. We there see the soldiery, without provocation attacking, stabbing and cutting the inhabitants with their swords & firing upon them regularly...Three men fell immediate sacrifices to this inhuman outrage; and many others are mortally or dangerously wounded..." with much more, taking over one-third of the front page.
Such content continues on the front page with another one-third page letter "To the Ministry" which includes in part: "...You are well informed of the frequent disturbances at Boston, and that the Army has planted there two pieces of cannon before the Town Hall...The late Massacre at Boston, committed by the King's troops, surpasses the barbarity & inhumanity of the Spaniards at Mexico..." with more. Then it continues with a list of 4 items for reconcilating with the Colonies, including; "Order home your Army from America...Repeal all those duties which were imposed for the purpose of a revenue...Abolish the Board of Commissioners of Customs...Dissolve the Courts of Vice Admiralty...".
And then most of the balance of the issue is a letter concerning the troubles with England keeping a standing army in the colonies, and more.
Talk of the Boston Massacre continues inside as well, too much to mention in total. A few random bits include: "...the many outrages & massacres that have lately been committed by the army...This last tragedy is at once the most bloody & the most cruel & cowardly of any...that 5 days before the massacre he met 4 soldiers of the 29th regiment & that he heard them say, that there were a great many that would eat their dinner on Monday, that should not eat any on Tuesday...It is to be hoped however that Capt. Preston, and his fellow murderers, have already met with the fate they deserve...done for us respecting the removal of the troops or not sending more for the future; and that is, we are to pledge ourselves, to shew mercy rather than exact severe justice upon Capt. Preston & the soldiers who fired among the people on the fatal 5th of March..." and even more. There is also some reporting concerning the Non-Imporyation Agreement.
Four pages, never bound nor trimmed, this issue was professionally restored with some rubbing at the central folds and minimal loss at a few folds.