Home > Back to Search Results > Lincoln when he was an unknown... Mormons & California...
Click image to enlarge 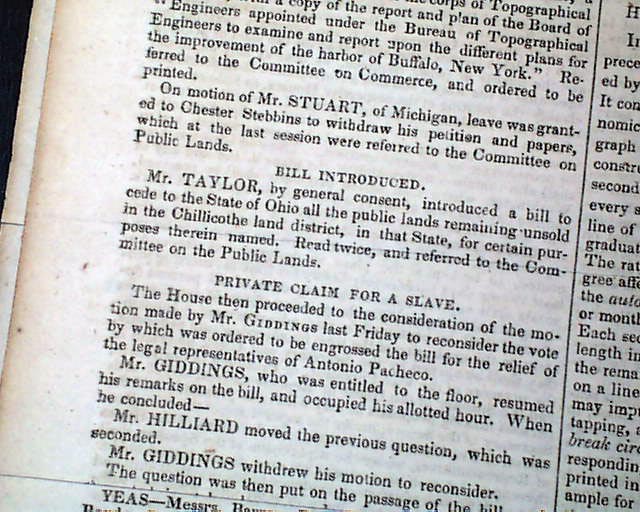 Lincoln when he was an unknown... Mormons & California...


NATIONAL INTELLIGENCER, Washington, D.C., Jan. 8, 1849  Page 4 has reports from the House of Representatives and included within a list of those who voted "Yea" on the topic: "Private Claim For A Slave" is Abraham Lincoln.

This was Abraham Lincoln when he was serving just two years as a Representative from Illinois. In 1846 Lincoln ran for the United States House of Representatives and won. While in Washington he became known for his opposition to the Mexican War and to slavery. He served only one term, from March, 1847 thru March, 1849, so Congressional reports with mention of Abraham Lincoln are quite scarce. Lincoln returned home after his term and resumed his law practice.
Quite rare to find period mentions of Lincoln--albeit quite inconspicuous--from long before he would become a national figure. Lincoln was just 40 years old at the time.
Additionally, page 5 has: "From California and the Salt Lake" which mentions in part: "...The Mormon colony are reported to be in a prosperous condition, having a surplus of several thousand bushels of grain & other necessaries of life..." with more, including mention of gold.
Complete in 8 pages, nice condition.