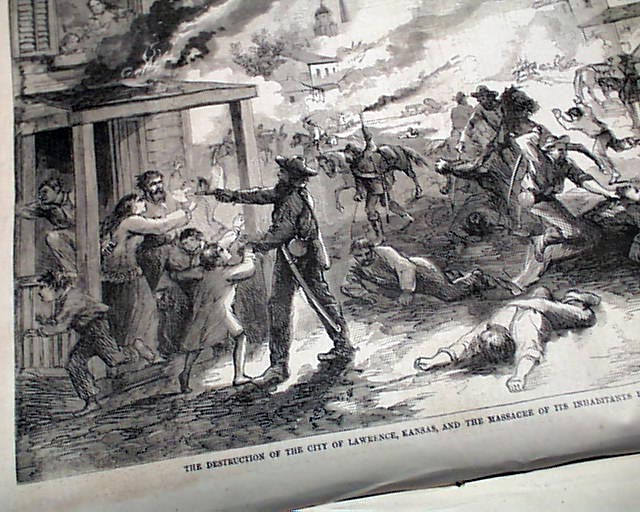 The full front page shows: "Moseby's Guerrillas Destroying Sutlers' Train".
Inside prints include a dramatic fullpg: "The Destruction of the City of Lawrence, Kansas and the Massacre of its Inhabitants by the Rebel Guerrillas"; a full page with 4 prints: "Morris Island Sketches"; a three-quarter page map shows: "...That Part of Tennessee Through Which General Rosecrans Advanced From Murfreesboro to Tullahoma and Chattanooga".
A nice, tipped-in (desired) doublepage centerfold shows: "Bombardment of Forts Sumter and Wagner in Charleston Harbor, August 17, By the United States Military and Naval Forces, Under General Gilmore and Admiral Dahlgren".
Another full page shows: "The First Maine Cavalry Skirmishing"; a half pg: "Resumption of the Draft--Outside the Provost Marshal's Office, Sixth District--The Crowd Cheers" another half pg: "Resumption of the Draft...The Wheel Goes Round."
The back page has a political cartoon: "Improved State of the Affairs in the City."
Sixteen pages, a bit irregular at the spine, an archival mend to page 2, otherwise nice condition.