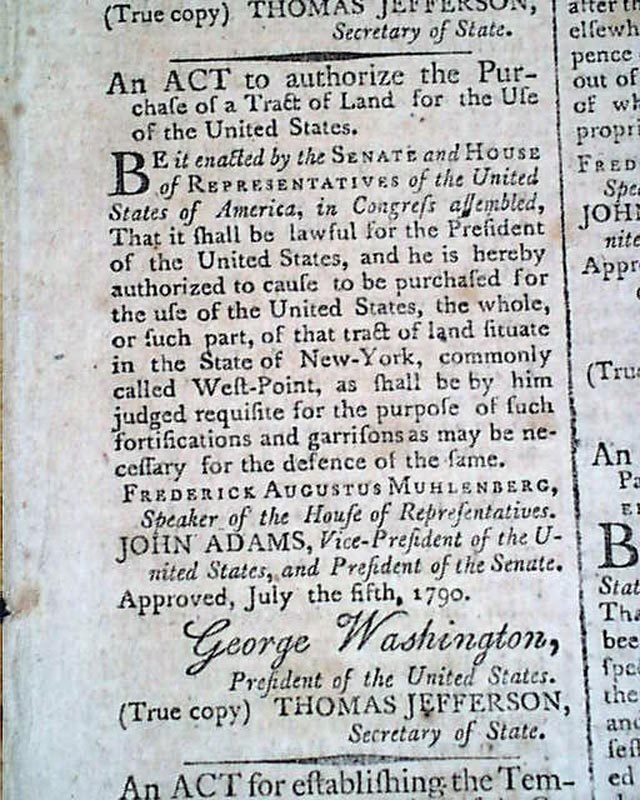 Fully half of the front page is taken up with not one or two, but four Acts of Congress, each signed in script type by the President: George Washington, as well as in block type by the Secretary of State: Thomas Jefferson.
The Acts are headed at the top of the first column by an engraving of a heraldic eagle. One of the acts is concerning the census in the state of Rhode Island, and another is: "An Act for Establishing the Temporary & Permanent Seat of the Government of the United States", which in itself is nearly a full column in length. The text includes: "...that a district of territory, not exceeding ten miles square, to be located as hereafter directed on the river Potomack...". Quite notable on the beginning of the nation's capital at Washington, D.C.
Another Act is for: "... the Purchase of a Tract of Land for the Use of the United States." with the text noting in part: "...cause to be purchased, for the use of the United States...that tract of land situate in the state of New York commonly called West Point...for the purpose of such fortifications and garrisons as may be necessary for the defence of the same." This authorization would pave the way to the eventual creation of the West Point Military Academy, more formally proposed just four years later.
The front page also has an: "Extract of a Letter from Dr. Franklin to Mons. Dubourg, the French Translator of his works, dated London, July 21, 1768" concerning the treatment of Smallpox.
As if this content was not enough, half of page 2 is taken up with a complete printing of the historic Census Act, titled: "An Act Providing for the Enumeration of the Inhabitants of the United States" which was approved by Congress on March 1, 1790. Included within the lengthy text is a chart of the categories noted in the census, which seems very simple compared to today's process, being just 6 columns, which separates free whites from "All other free persons" and from "Slaves".
The 1790 census was the very first, a tradition which continues every ten years to this very day.
Four pages, never bound nor trimmed with wide margins, a bit of foxing mostly near the margins, nice condition.