Home > Back to Search Results > Creation of the Department of the Navy...
Click image to enlarge 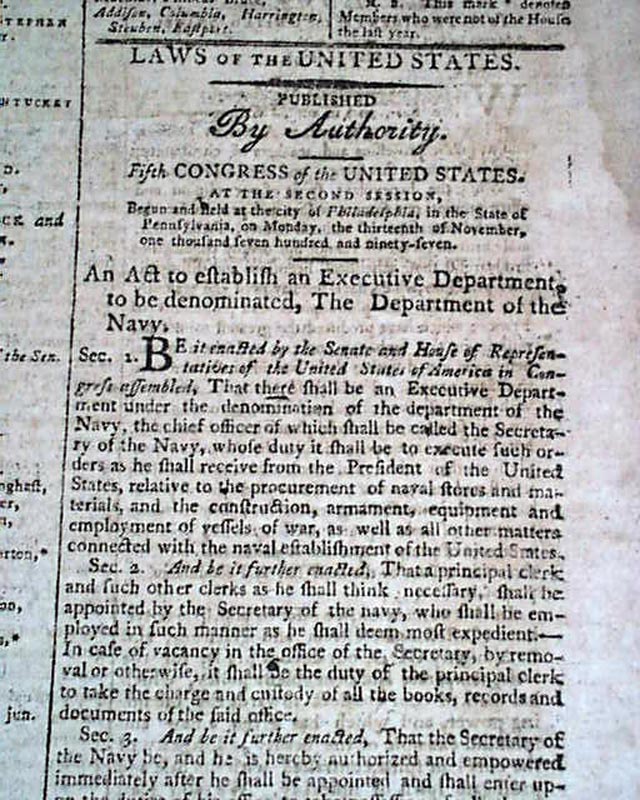 A very significant issue, as the front page contains the Act of Congress which formally established the Department of the Navy.
The United States Navy can trace its history back to 1775 when the Continental Congress passed a resolution creating the Continental Navy. Soon after the end of the Revolutionary War the ships were sold & the Continental Navy was disbanded. Later when trouble erupted with pirates Congress created the "Naval Act of 1794" which resulted in the first six frigates (only 3 initially authorized to be completed). With troubles brewing with England & France & the "Quasi-War", concerns about the War Department's ability to manage a navy led to the creation of the Department of the Navy, which happened on April 30, 1798.
This newspapers contains on the front page the full printing of that Act which created the Navy Department, titled: "An Act to establish an Executive Department to be Denominated the Department of the Navy", and contains all five sections. It is signed in  script type by the President: John Adams, and in block type by the Vice President: Thomas Jefferson.
Although of much less consequence the remainder of the last column on the front page has another Act of Congress which carries over to page 2 & signed by both men as well.
Complete in four pages, very nice condition.