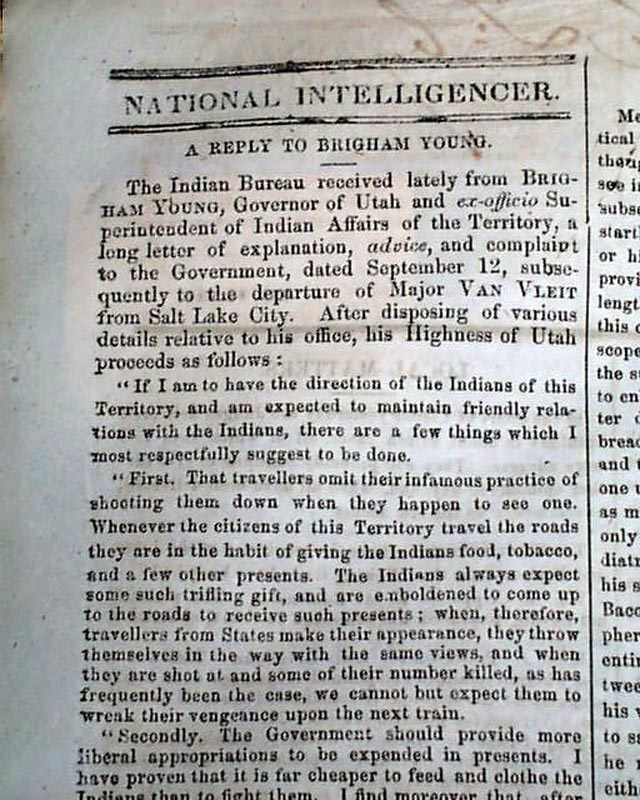 
DAILY NATIONAL INTELLIGENCER, Washington, D.C., Nov. 17, 1857  This issue has multiple reports regarding the Mormon tensions of mid-late 1857. Page 2 begins with a full column article headed: "A Reply to Brigham Young" which kicks off with Young's detailed letter on how to handle the Indians, followed by the response of J.W. Denver, Commissioner of Indian Affairs. Both letters detail the strained relationship among the Mormons, Indians, and the federal government.
Also of interest is the more than half a column article on page 3: "The Mormon Outrage" which reports an attack by the Mormons upon a wagon train of military supplies destined for U.S. force in Utah.  Although much was destroyed, no lives were lost.

Not shown in the photos is a small front page report: "Mormonism, By One Who Knows" which announces a lecture by ex-Mormon Elder, John Hyde.
Also not shown is another brief report on page 3: "Later from the Plains" which states in part: "The Chief Engineer of McGraw's wagon road has arrived... He corroborates the reported destruction of the Government trains by the Mormons...Brigham Young disclaims all knowledge or participation in the destruction of the supply trains...".