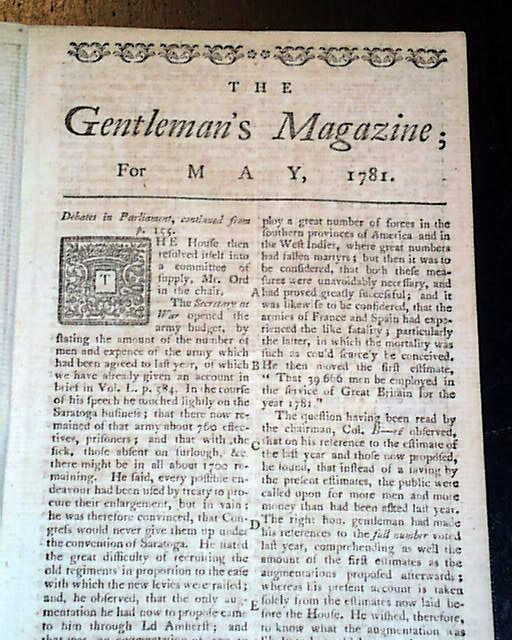 GENTLEMAN'S MAGAZINE London, May, 1781  Content includes: "Debates in Parliament" includes talk on America. Another report is a review of the: "Journal of Captain Cook's Last Voyage to the Pacific Ocean, on Discovery, performed in the Years 1776, 7, 8 &  9..." which takes over 3 pages.
Another report mentions in part: "...parties from Mr. Washington's army under the Marquis de Fayette were to proceed down the Elk by the way of Maryland, whilst a large body of Virginians militia under Mr. Nelson were to attack Gen. Arnold...the Admiral has had a conference with Gen. Arnold and finds that the plan of the rebel campaign is entirely disconcerted..." with much content on the naval battle followed by a list of killed & wounded & the ships involved.
There is also a letter signed: H. Clinton, and yet another very nice letter on the battle of Guilford Court House in North Carolina signed: Cornwallis.
The fold out road map is present, the only plate called for.
Complete in 48 pages, 5 1/4 by 8 1/4 inches, full title/contents page featuring an engraving of St. John's Gate, very nice condition.