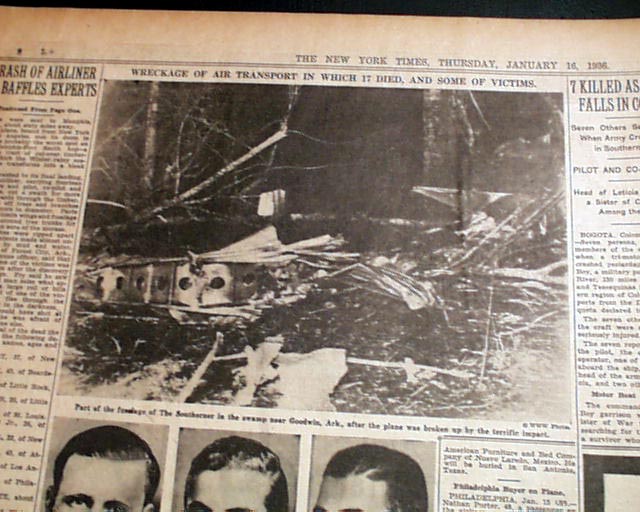 The front page has a one column heading: "CRASH OF AIRLINER BAFFLES EXPERTS; 17 BODIES REMOVED" with subheads. (see) Lengthy coverage continues inside with a few related photos. Loads of text.
Complete in 44 pages, light toning at the margins, a little spine wear, generally in nice condition.

wikipedia notes: American Airlines Flight 1 was a Douglas DC-2 airliner on a scheduled domestic passenger flight from Memphis to Little Rock. On Tuesday, January 14, 1936, the flight crashed into a swamp near Goodwin, Arkansas, disintegrating on impact and killing all 17 people on board. "With great difficulty the bodies of the victims were brought out of the marsh where their bodies were found scattered among fragments of the shattered plane." At the time, it was the worst civil plane crash on U.S. soil. As of 2016, it remains the deadliest crash in Arkansas state history.