Home > Back to Search Results > Much by and about Ben Franklin, who recently died...
Click image to enlarge 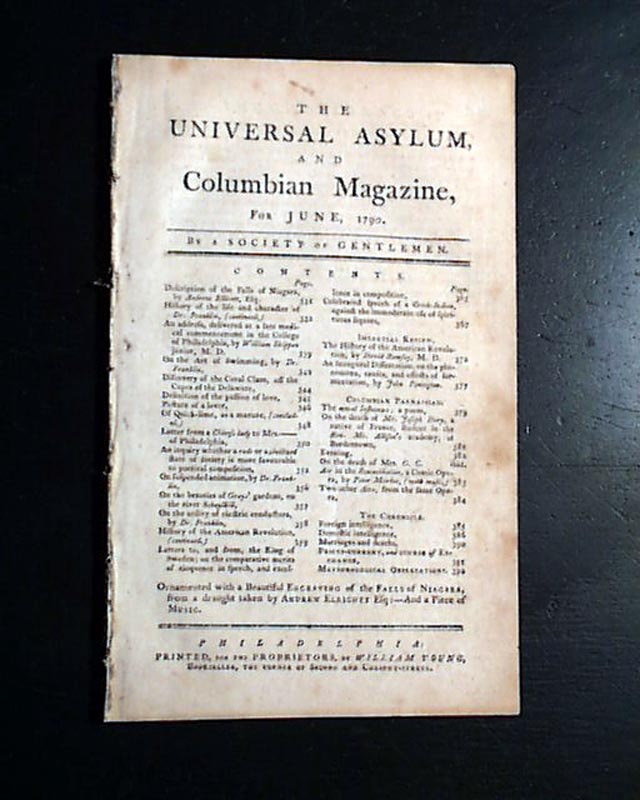 Much by and about Ben Franklin, who recently died...

The issue begins with: "Description of the Falls of Niagara" which takes over a full page (lacking the related plate).
Also within are several item on and by Ben Franklin, who passed away in Phila. on April 17: "History of the Life & Character of Benjamin Franklin" which is continued from a previous issue & which takes 7 pages, concluding in a future issue; "On the Art of Swimming" which is a letter by Ben Franklin; "Letter from Dr. Franklin to Mrs. Dubourg..." concerning animal life; "Letter from Dr. Franklin to Mr. Landrina on the Utility of Electric Conductors" which is signed in type: B. Franklin.
At the back is "Intelligence" including news headed: "United States" which includes an address to the President by the Society of Cincinnati, with his response signed in type: G. Washington. Also a notable report headed: "Ratification of the Constitution by Rhode Island" with the details. Rhode Island was the last of the original 13 states to ratify.
Complete in 64 pages, full title/contents page, 5 1/4 by 8 1/4 inches, great condition.