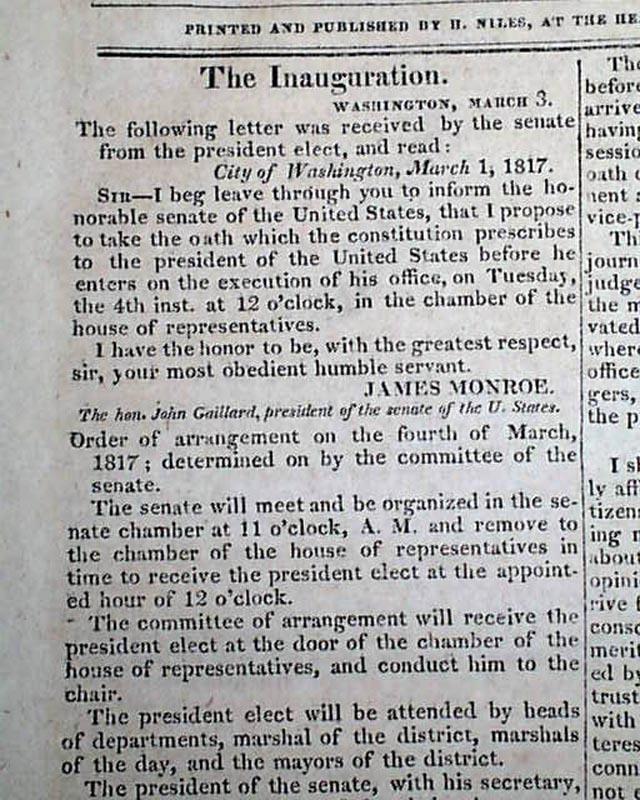 Certainly the best content is the coverage of: "The Inauguration" of James Monroe as President. The reporting begins on the front page & includes a note signed in type: James Monroe, with most of the second column taken up with the beginning of his inaugural address headed "Speech", which carries over to take all of pages 2, 3, and nearly half of pg. 4.
Following this complete printing of Monroe's inaugural address is coverage concerning the inaugural proceedings, beginning:
"Having concluded is address, the oath of office was administered to him by the chief justice of the United States. The oath was announced by a single gun & followed by salutes from the navy-yard..." with more.
Additionally there is coverage of the ceremonies for: "Vice President Tompkins" including his address to the Senate.
Great to have this report not only on the front page, but from a city very close to Washington, D.C. where Monroe was inaugurated.
There are also several documents concerning: "Relations with Spain" signed in type by James Madison and four by James Monroe, plus a lengthy "List of Acts Passed at the Second Session of the 14th congress, Just Closed". There are various "Appointments by the President of the United States..." which includes: "To be secretary for the department of state, John Quincy Adams, of Massachusetts."
Sixteen pages, 6 1/4 by 10 inches, nice condition.