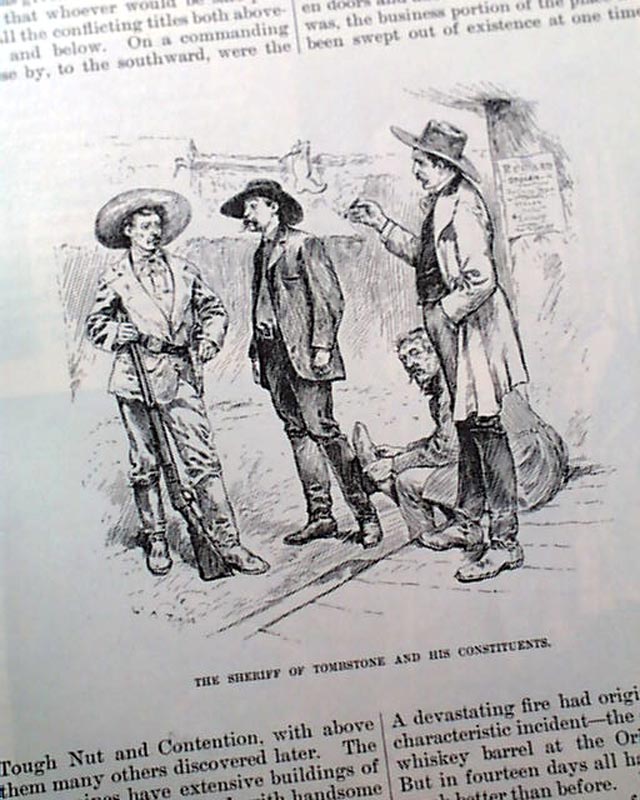 A great issue with much reporting on some of the romance of the Old West. The first article in the issue, "Across Arizona", takes 16 pages and is quite detailed, containing eleven prints, including "Norton's Landing on the Colorado River" a: "Map of Southern Arizona" "Pasqual, the Yuma Chief" "Yuma Indians At Home" a distant view of "Tombstone", a full-figure print of: "Ed Schieffelin", an Indian scout and prospector who discovered silver in the Arizona Territory which led to the founding of Tombstone; "Mission Church of San Xavier Del Bac near Tucson" "Apache Prisoners at Camp Lowell" "Street View In Tucson" and more.
Text is terrific on the early years of Arizona, and includes talk of Billy the Kid and Curley Bill, plus a good report of the gun fight at the OK Corral, with mention of Wyatt Earp and Doc Holliday, Ike Clanton, and the McLowry brothers, as well as an illustration captioned: "The Sheriff of Tombstone & His Constituents."
One portion reads: "...Our visit happened to be timed upon the heels of a conflict making the most tragic page yet written in the annals of Tombstone...City Marshal Earp, with his two brothers, and one 'Doc' Holliday, a gambler came down the street armed with rifles & opened fire on the two Clanton brothers & two McLowry brothers...Three of them fell & died on the spot 'Ike' Clanton alone escaped..." with more.
A wealth of interesting reading on Arizona, written from when it was still the Old West.
Measures 6 1/2 by 9 1/2 inches, disbound without wrappers, 160 pages, very nice, clean condition.