Home > Back to Search Results > Colonies wish to declare themselves "free and independent"...
Click image to enlarge 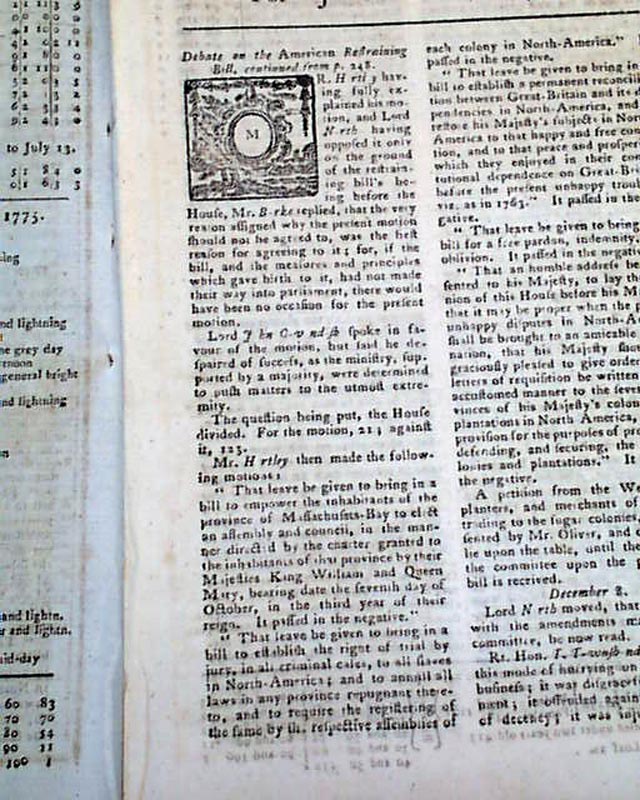 Colonies wish to declare themselves "free and independent"...

GENTLEMAN'S MAGAZINE, London, July, 1776  It is rare to find newspapers or magazines with the magical date of "July, 1776". Here is one.
The first article is: "Debate on the American Restraining Bill" with has much interesting reading and takes six pages. There are also 3 pages of text on events in America, including: "Proceedings of the American Colonists since the Passing the Boston Port Bill" with various reports, including one stating that: "...the main army of the United Colonies has changed its situation; and that the head-quarters are now at New-York, where Gen. Washington has already taken up his residence...".
Included is a proclamation issued by Congress concerning a redress of the grievances of the colonies says in part: "Therefore, Resolved, that it be recommended to the respective Assemblies and Conventions of the United Colonies, where no government sufficient to...their affairs has been...established, to  adopt such a government...", signed in type: John Hancock.
Perhaps the most significant report is one mentioning the convention at Williamsburgh containing an important resolve passed by the delegates which reads in part: "...That the delegates appointed to represent this colony...be instructed to propose to that...body to declare the united colonies free and independent...and that they give the assent of this colony to such declaration ....".
Yet another report has a similar recommendation, stating: "...inhabitants of this town...unanimously instruct & direct you...for the safety of the United Colonies to declare them independent of Great Britain...".
Also included is a nice letter from Montreal by Guy Carleton to George Germaine concerning military events in that theatre, signed by him in type: Guy Carleton.
Great content in this issue from the historic year of 1776.
The plate called for is present.
Complete in 48 pages, 5 by 8 1/4 inches, full title/contents page featuring an engraving of St. Johns Gate, great condition.