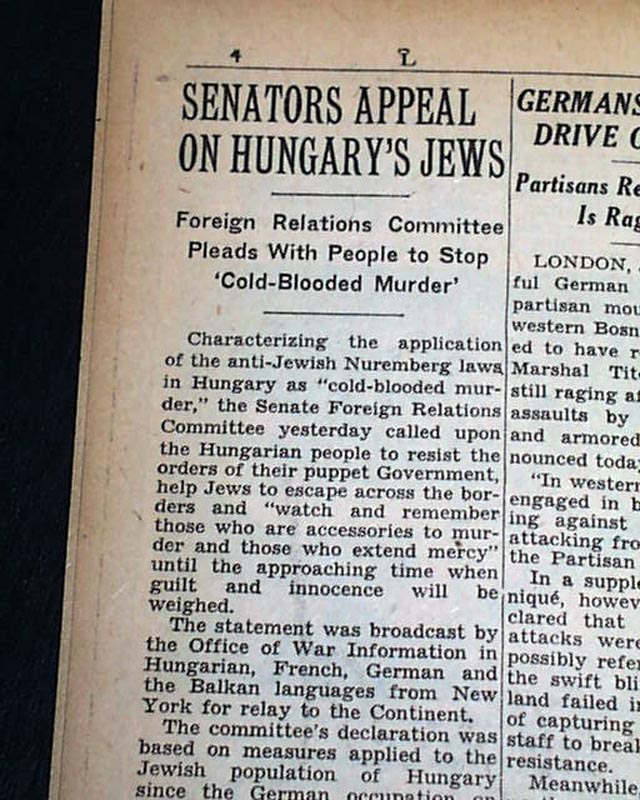 
This issue is being offered as a piece of history.  Issues with content related to the numerous atrocities perpetrated upon humanity during this era help to verify what some feebly attempt to deny. It's interesting to note that many such reports never made it to the front page... and in the case of numerous newspapers... never made it to print at all. We at Rare Newspapers offer such items being mindful of Sir Winston Churchill's famous quote:  "Those who fail to learn from history are doomed to repeat it".

Page 6 has one column headlines: "POLE SAYS NAZIS PLAN SLAVE TOWN," "Reports 75,000-Acre Plot in Poland Even Contains Permanent Factories".
Page 4 has a one column headline: "Senators Appeal on Hungary's Jews" with subhead:"Foreign Relations Committee Pleads with People to Stop 'Cold-Blooded Murder' ".
See photos for coverage on the atrocities in Nazi-occupied Poland. Rare to find such reports in newspapers at this time as the reality of the holocaust was just being known.
Other news, sports and and advertisements of the day throughout with much on World War II.
This is complete in 70+ pages, light toning at the margins, nice condition.