Home > Back to Search Results > Work towards creating a tariff plan for the new government...
Click image to enlarge 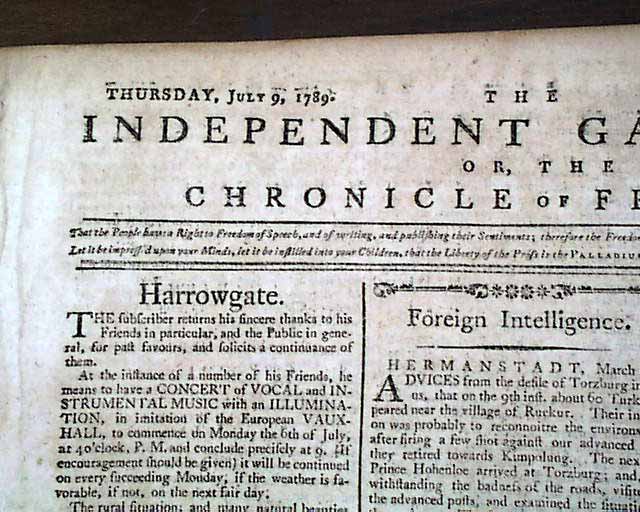 Work towards creating a tariff plan for the new government...


THE INDEPENDENT GAZETTEER OR CHRONICLE OF FREEDOM, Philadelphia, July 9, 1789  Nice to have a newspaper from this town from the year of the formation of our nation's government.
Page 3 includes reports from "Proceedings of Congress" which includes some discussion on: "The bill to regulate the collection of the Impost, still under consideration...".
This was formally titled the Act to Regulate the Collection of the Duties Imposed by Law on the Tonnage of Ships, which would be formally approved on July 31. This would be just the fifth Act of Congress of the new federal government.
This would also be the historic creation of the United States Customs Service, now known as the Bureau of Customs & Border Protection. This was the agency charged with collecting the duties from the historic Tariff Act of 1789.
. Various ads on the back page including a nice illustrated ad for a stage coach.
Complete in 4 pages, a bit close-trimmed at bottom of front page only affecting just one word, 9 1/2 by 11 1/2 inches.