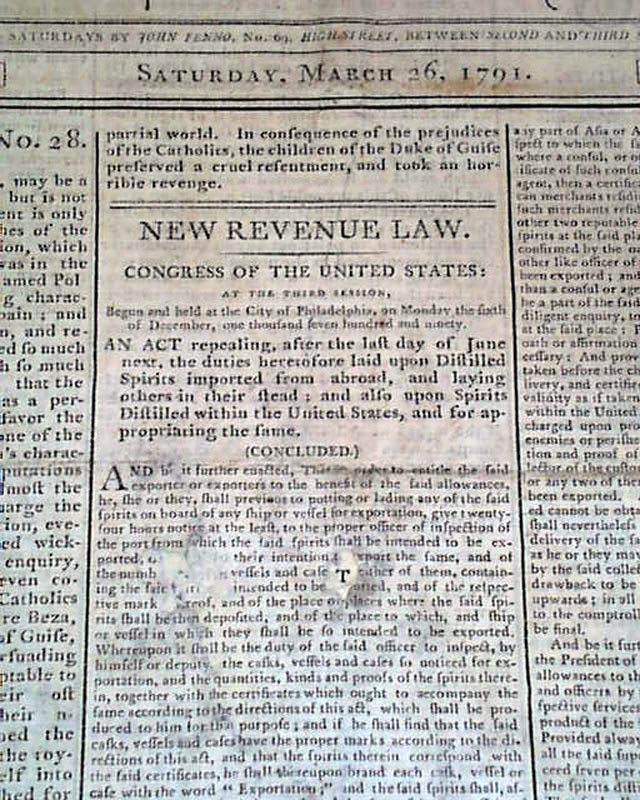 Nearly two-thirds of the front page is taken up with the conclusion of an Act of Congress concerning duties for distilled spirits, signed in block type by three of the more notable names of the 18th century: George Washington, John Adams, and Thomas Jefferson. Some damage affects words in this report.
This was the Act which sparked the Whiskey Rebellion.
The back page has: "A Proclamation" which concerns Indian tribes, headed with a nice engraving of a heraldic eagle and signed in type by George Washington and Thomas Jefferson. Also on the back page are two: "Treasury Department" reports taking an entire column.
A page 3 item notes the Presidential appointments of 5 men as subscribers to the Bank of the United States. There is also a lengthy list of Presidential "Promotions and Appointments" in the military including Arthur St. Clair as Major General.
Remember that the capital of the federal government was in Philadelphia ate this time.
Four pages, some damage to the middle section of the front leaf does cause text loss, with less effect to the back leaf. Offered at less than half price.