Home > Back to Search Results > Workings of Congress on creating the Tariff Act of 1789...
Click image to enlarge 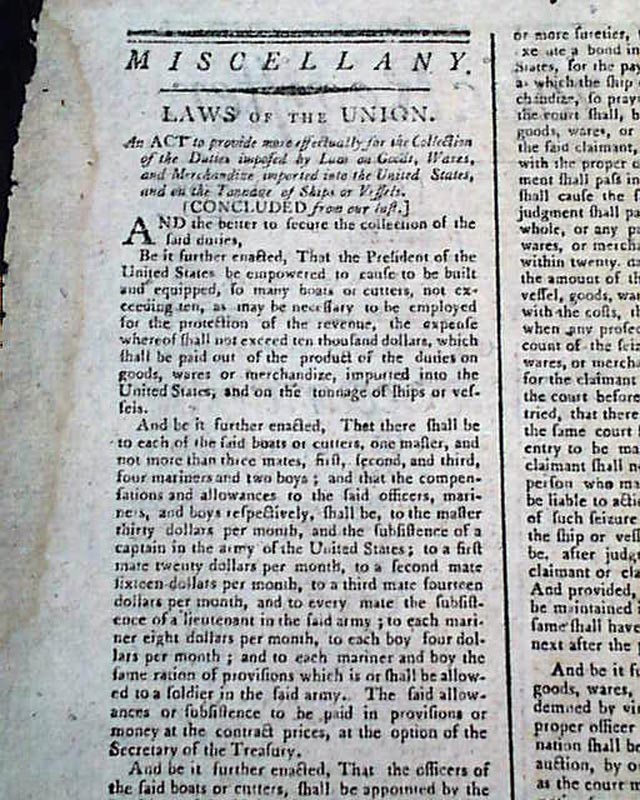 Workings of Congress on creating the Tariff Act of 1789...

One of the first priorities of the new federal government was creating a means of tariff revenues, of such importance that the resulting Tariff Act of 1789 was just the second Act approved by Congress. The Tariff Act would be approved on July 4.
But it is this issue which details the considerable discussion on how the tariffs would be administered, their amount on various products, and the many intricacies of creating a fair & equitable set of tariffs on imports from foreign countries.
Over half of the front page is taken up with: "Some Observations on the General Impost" being no. II in a series. It offers much insight into the needs of the government at that time. Then beginning in the third column and taking almost all of page 2 is the considerable discussions in Congress on April 21 (9 days before Washington's inauguration) on a proposed tariff act, headed: "Proceedings of Congress, In the House of Representatives of the United States".
A fine opportunity for a period account of the workings of the new federal government on a critical need.
Four pages, some irregularities at the margins causes no effect to any text, some minor foxing.