Home > Back to Search Results > On the Treasury Bill and compensations for various officers...
Click image to enlarge 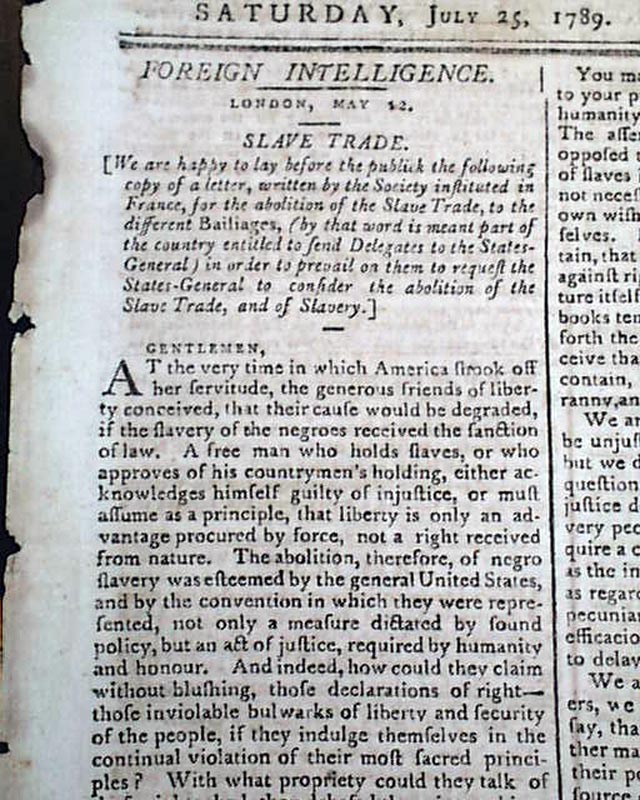 On the Treasury Bill and compensations for various officers...


THE MASSACHUSETTS CENTINEL, Boston, July 25, 1789  Half of the front page is taken up with an article headed: "Slave Trade" which is a report from a French society for the abolition of the trade. One bit notes: "...The abolition, therefore, of negro slavery was esteemed by the general United States & by the convention in which they were represented, not only a measure conducted by sound policy, but an act of justice, required by humanity and honor...".
Page 2 has a terrific discussion from the early weeks of the new federal government on: "Compensations", debating the pay rates of the various officers.
Page 3 has "News From New York" which mentions that: "Yesterday the Senate passed the Treasury Bill with one very small alteration..." with more. And an interesting item includes: "...we should not hesitate to style him who represents them 'MAJESTY OF THE PEOPLE' whom they have elected their Sovereign, 'His majesty THE PRESIDENT of the United States'..." with more on how he should be addressed.
Nice to have a newspaper from the year of the creation of our federal government & just 3 months after the inauguration of George Washington.
Four pages, slightly irregular at the blank spine margin, close-trimmed at the bottom of the back page, nice condition.