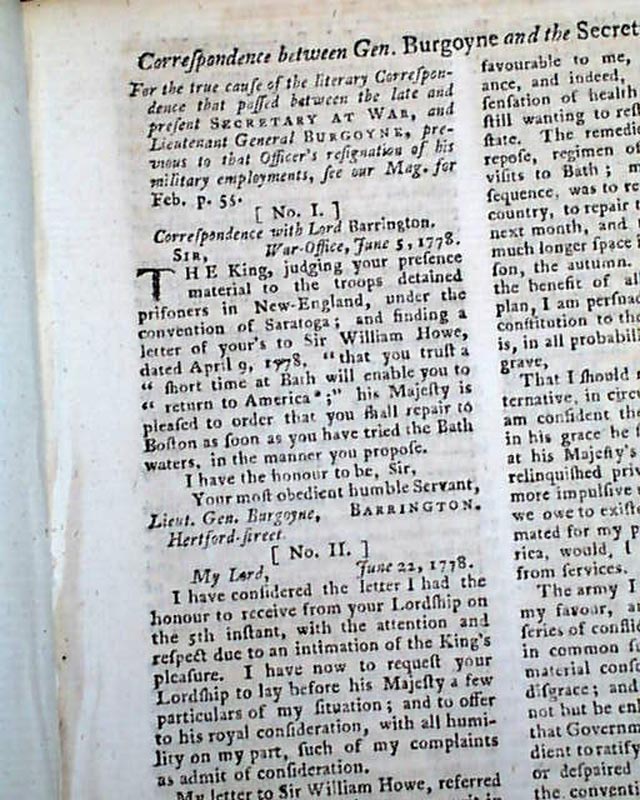 The first 8 pages are taken up with "Summary of Proceedings in the Present Parliament" which includes some discussion of the affairs in America.
But the prime content would be the excellent coverage of events relating to General Burgoyne & his defeat at Saratoga, taking several pages & includes: "...The army I commanded, credulous in my favour, and attached to me by the series of conflicts & misfortunes we have in common sustained, would not find material consolation from my return in disgrace...indication that government either thought it inexpedient to ratify the Convention of Saratoga, or despaired of a ratification effectuating the convention of that army for they would not conceive it possible had the return of the troops been in view..." with much more.
There is a brief & interesting item beginning: "Dr. Franklin (if I mistake not) lately plumed himself on the discovery of a method to still rough water by means of oil...". Another article is: "On the First Peopling of America".
The 'Historical Chronicle" as some items on the Revolutionary War, noting; "...the American army, under the command of Gen. Sullivan in the Back settlements, is in a most deplorable situation, in want of every necessary & almost surrounded by savages...a large reinforcement had been intercepted & almost all cut to pieces, & that with regard to the royal army under Gen. Clinton, it was in the best order imaginable & ready to take the field to seek the enemy...".
There is also a great report concerning John Paul Jones and his battle with the Serapis: "...your humanity dictated relative to the wounded men on board the two king's ships, the Serapis and the Countess of Scarborough...comply with the strict orders of his Majesty his request that those ships and their crews may be stopped, & delivered up, which the pirate Paul Jones, of Scotland, who is a rebel subject, & a criminal of the state, has taken..." and a bit further on: "...to treat all those as pirates whose letters are found to be illegal for want of being granted by a sovereign power. The quality of Paul Jones, and all the circumstances of the affair, are too notorious for your High Mightinesses to be ignorant of them..." with more.
A brief item further on notes: "Such of the officers belonging to the frigates destined for the pursuit of Paul Jones as are in London, received orders on Saturday to repair to their ships immediately."
Present are both full pages plates called for, one being a nice print of: "Mount St. Michael's in Normandy".
Complete in 48 pages, 5 1/4 by 8 1/4 inches, full title/contents page with an engraving of St. John's Gate, period notations in one margin, nice condition.