Home > Back to Search Results > Rare mention of "Sally" in Callender's letter...
Click image to enlarge 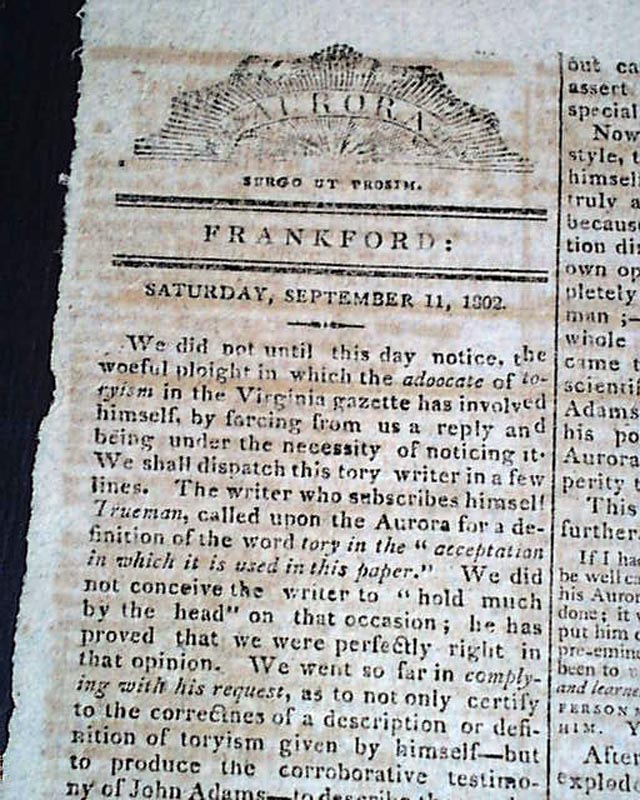 Note that this issue was published in nearby Frankford to escape the Yellow Fever epidemic in Philadelphia.
This issue has a wealth of fine content on the Callender/Jefferson situation. Page 2 begins with over a full column report/editorial concerning the two, the full text shown in the photos.
Also on page 2 is a letter signed in type by: Jas. T. Callender from Richmond, Sept. 2. It begins: "Sir, I am extremely tired of these long stories...attempting to show that Mr. Jefferson disapproved of the contents of 'The Prospect' and that he paid me these hundred dollars without being aware what kind of a book it was to be...".
It continues on and includes a very dramatic statement: "...Sally's business makes a prodigious noise here. You may save yourself the trouble a moment's doubt in believing the story. But what will you pious countrymen upon the Connecticut say to such African Amours? After this discovery I do not believe that, at the next election of 1804, Jefferson could obtain two votes on the Eastern side of Susquehanna; and I think hardly four on this side of it. He will, therefore, be laid aside...".
The content on Callender continues on page 3 as well with a report from the Richmond Examiner beginning: "It is said that proposals have been made to Callender to remove to Charleston for the purpose of writing for federal papers at that place. This he should by no means do..." plus much more.
Another bit notes: "...That Hamilton is a monarchist no one at present doubts, or pretends to doubt. His plan of a federal constitution, presented to the convention is evidence sufficient...".
Four pages, nice condition.

The content noted above requires a backdrop of knowledge on one of the more interesting figures in early American politics.
James Callender was one of America's earliest "scandalmongers". A political journalist, his writings were often controversial.  He curried favor with Republican interests early on, landing a job with Benjamin Franklin Bache’s newspaper, the Aurora General Advertiser.  Firing darts at Federalists like Washington, Adams, and Hamilton made him good friends with Republicans like Jefferson.  In fact, Jefferson called Callender “a man of genius”.
He became a central figure in the press wars between the Federalist and Democratic-Republican parties. Pleased with Callender's attacks on his rivals Hamilton & Adams, Jefferson viewed him as journalistic ally, even supporting Callender financially.
But Callender's attack on President Adams had him jailed under the Sedition Act. But after Jefferson won the presidency he pardoned Callender, who then solicited employment as a postmaster which he felt was owed him by Jefferson. Jefferson denied it.
Callender then began publishing existing rumors claiming President Jefferson had children with slave Sally Hemings.