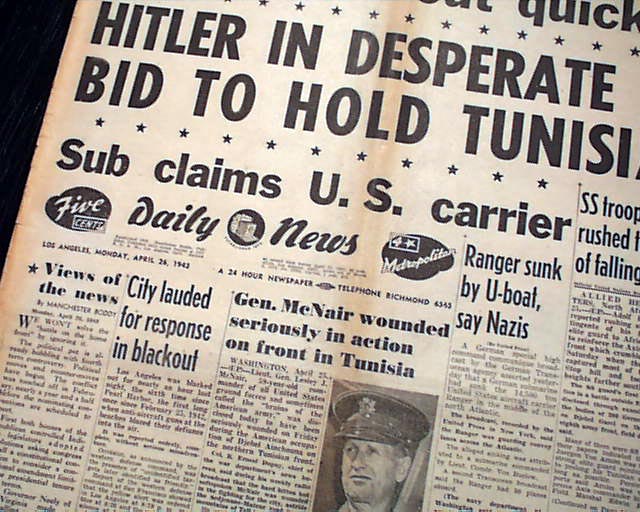 wikipedia notes: On 25 April 1943, German radio announced "Achtung! Achtung! We are proud to announce that a German submarine has sunk the United States aircraft carrier Ranger in the North Atlantic!" Following this broadcast, German news releases reported that Commander Otto von Bülow of the U-boat U-404, personally decorated by Adolf Hitler with Oak Leaves to the Knight's Cross, had "in addition to torpedoing four steamers, caught and sank the American aircraft carrier Ranger."
The US Navy, concerned about the impact of the German announcement on families of Ranger crewmen, issued a denial of the German claim. In the radio broadcast dated 15 February 1944, Captain Gordon Rowe, Commander of USS Ranger, stated: The story that we were sunk was a coward's trick—spreading anxiety and fear among the innocent.... The next day we issued a denial and ... on October 4 we spread panic and chaos in the Norwegian shipping lanes. Only one thing we regret. We kept looking for the Tirpitz but either she wouldn't or couldn't come out.... Meanwhile, the Ranger, still very much afloat, is doing her job.