Home > Back to Search Results > Advice to friends of Mary Surratt...
Click image to enlarge 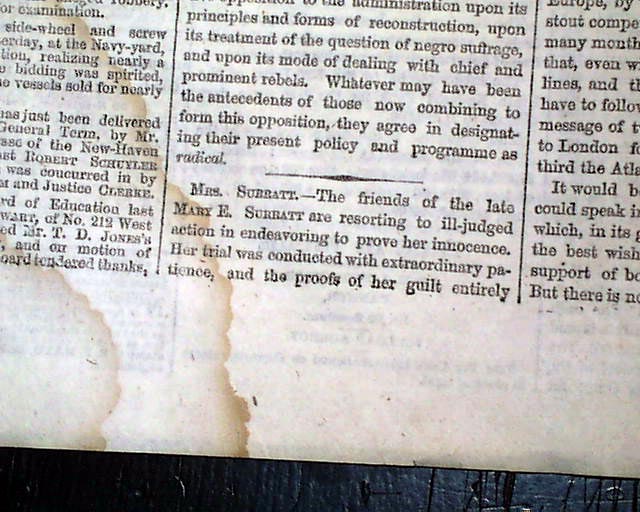 Page 4 has a brief, rather inconspicuous item with a small heading: "Mrs. Surratt" which reads: "The friends of the late Mary E. Surratt are resorting to ill-judged action in endeavoring to prove her innocence. Her trial was conducted with extraordinary patience, and the proofs of her guilt entirely justified the conclusion arrived at. Disloyal persons may endeavor to lead to an opposite conclusion, but they will not succeed in that endeavor. She has paid the penalty of her crime, and the wisest thing is for all who were upon terms of friendship with her to let her name be as far forgotten as the magnitude of that crime will allow." (see)
The trial of those accused of conspiring to assassinate President Lincoln remains a controversial event in American history. Ultimately four would be executed by hanging for their involvement, one a woman, Mary Surratt, the very first woman to be executed by the United States government.
Eight pages, some damp staining, irregular along the spine, otherwise good.