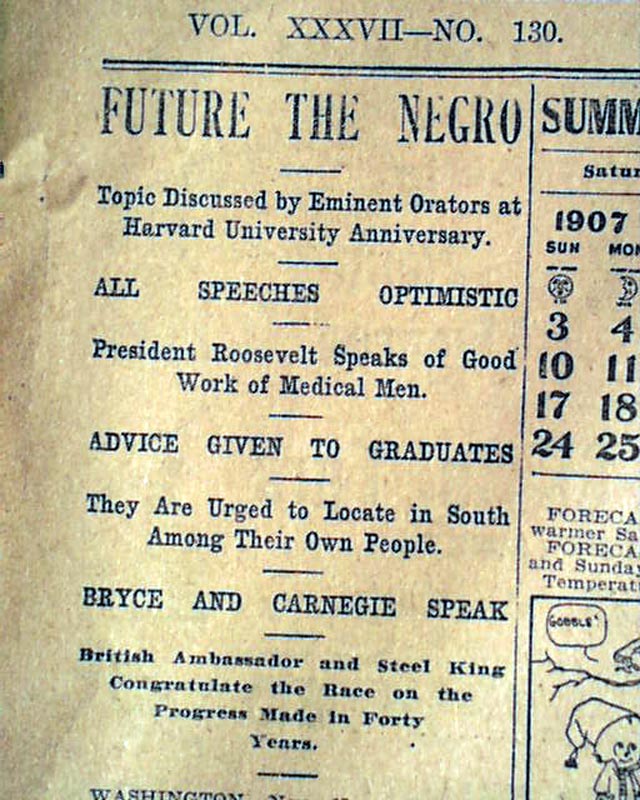 
THE OMAHA DAILY BEE, Nebraska, Nov. 16, 1907  A front page 1-column heading provides details of the orations given at Howard University's 40th year anniversary celebration: "FUTURE THE NEGRO", with subheads: "President Roosevelt Speaks of Good Work of Medical Men" and "ADVICE GIVEN TO GRADUATES", and "British Ambassador and Steel King Congratulate the Race on the Progress made in Forty Years". The article includes statements by President Theodore Roosevelt, Andrew Carnegie, and Ambassador James Bryce, a portion which includes: [Ambassador Bryce] "pointed to the development of the race during the last forty years as being marvelous compared with the development of the Anglo-Saxon race". View the images for excerpts from all three.
Complete in 16 pages, loose at the spine, various flaking at the margins. Very fragile & should be handled carefully.
Note: One of the subheads mistakenly refers to the school as Harvard University. The text within the article itself corrects this.