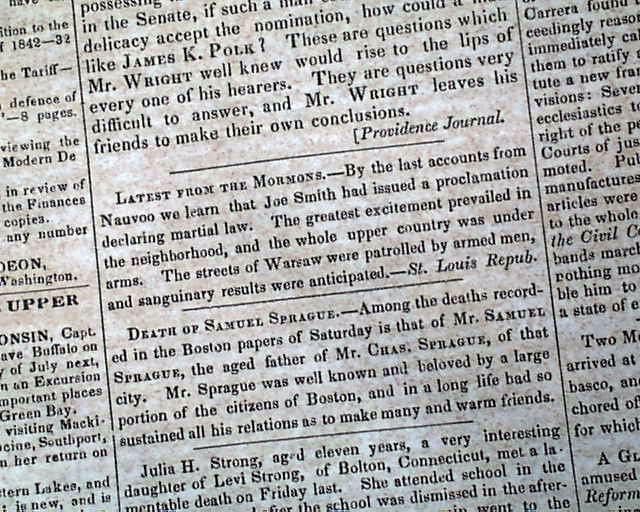 
NATIONAL INTELLIGENCER, Washington, D.C., June 27, 1844  Page 3 has a brief yet notable item with a small heading: "Latest From the Mormons" and reporting: "...from Nauvoo we learn that Joe Smith had issued a proclamation declaring martial law. The greatest excitement prevailed in the neighborhood & the whole upper country was under arms. The streets of Warsaw were patrolled by armed men, and sanguinary results were anticipated."
Mormon leader Joseph Smith had declared the local newspaper "Nauvoo Expositor" a new newspaper by non-Mormons who had seceded from the church, and had it destroyed. Trouble ensued, causing Smith to declare martial law. He would be jailed for inciting a riot in the destruction of the newspaper, and a few days later--the date of this newspaper--he and his brother would be killed in jail.
Four pages, foxing, a few minor margin chips, good condition.